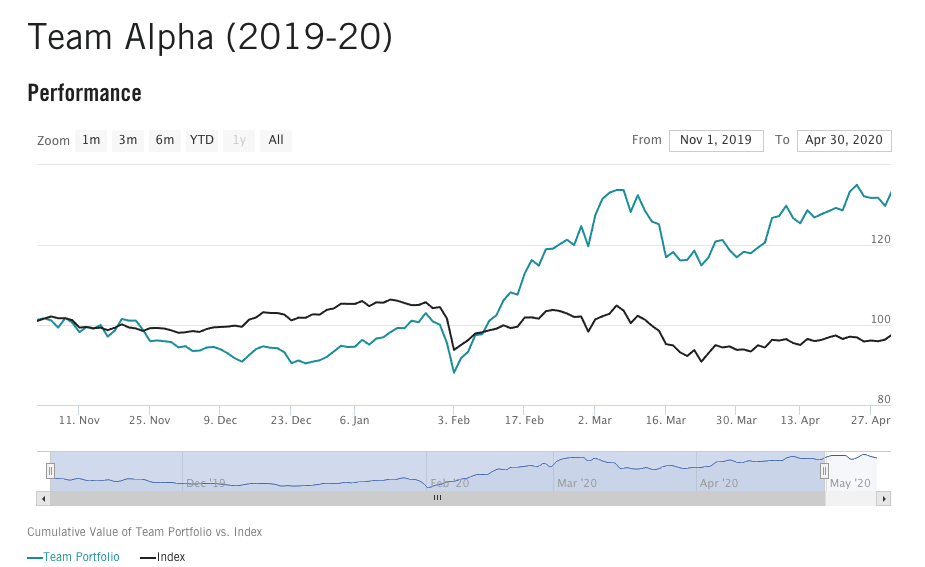 A team of students from Renmin University of China has won the $3,500 Performance Prize in the 2019-20 Global Network Investment Competition, sponsored by the Yale School of Management’s International Center for Finance.

The portfolio selected by the team Alpha in October 2019 achieved a gross return of 33.63% over the six months ending on April 30, while the Shanghai Stock Exchange Composite Index fell by 2.36% over the same period, giving Alpha a net return of 35.99%. The team’s portfolio included companies in the food, technology, media, pharmaceuticals, and alcohol industries. It was the second consecutive year that a team from Renmin won first place in the competition.

“Just like our team name, Alpha, we took a bold approach when selecting our stocks,” said Zhenxing Ning, a member of the team. “We combined quantitative and qualitative analysis to handpick the industries and stocks that had the potential to outpace the growth of the market.”

The team looked at events in the news to find target stocks. For example, an outbreak of a viral disease among pigs increased pork prices and boosted related stocks, Ning noted. “When selecting our stocks, we also got great help and guidance from our advisors in Renmin Business School,” he added. “We also had our moments of disagreements. But we debated and reached an unanimous conclusion.”

“Our idea was very simple,” said Haopeng Tian, a second-year Yale MBA student and a member of the team. “It is the concept of thematic equity. Last October, we looked at what was happening in the world, and started with several top-down themes: China’s manufacturing upgrade, ESG investments, geopolitical tension during deglobalization, and late-cycle inflation. Then, we picked the most expressive single names based on these themes”—including Tesla, Beyond Meat, and Barrick Gold.

When the team looked beyond the theme-based strategy, performance suffered. “We ran out of themes and decided to choose a random stock based on implied volatility for its April 2020 month-end stock option,” Tian remembered. “Unfortunately, that did not work out. Next time when we run out of themes, I would simply choose a safe beta bet so that its performance does not tank the entire portfolio.”

Overall, 14 of the 24 teams in the competition had a positive net return during a period of market turmoil.

The Global Network Investment Competition also includes a Security Analysis Prize, in which the student teams pitch one of their portfolio selections to a panel of investment professionals. This year’s winner was a team of students from the University of Cape Town Graduate School of Business.

The International Center for Finance (ICF) is concluding its sponsorship of the Global Network Investment Competition after five years. Previous winners of the Performance Prize have included teams from ESMT Berlin, the University of Indonesia, and the Haas School of Business at the University of California Berkeley.

Camino de Paz, managing director of global initiatives at Yale SOM, expressed her appreciation for ICF’s sponsorship of the competition since 2015, when it was conceived by William Goetzmann, Edwin J. Beinecke Professor of Finance and Management Studies and the ICF’s faculty director. “It’s a great example of a faculty-driven initiative,” she said. “Will suggested that it would be a great way to teach students in the network about markets in other countries—and it has been.”

One of the strengths of the Global Network is its ability to provide a platform for intellectual exchange, de Paz said: “I hope that another school in the network will be interested in sponsoring a similar competition that will bring together students with common interests across the network.”