China will remain the world’s most dynamic major economic area in a decade, according to a survey of 272 faculty experts in the Global Network for Advanced Management, a coalition of 30 top business schools in 28 countries around the world. Additionally, while Angela Merkel, Pope Francis, and Justin Trudeau get high marks for their global leadership across all six continents represented by the network, leaders such as Donald Trump, Vladimir Putin, and Xi Jinping were among the least-admired public figures. The survey of faculty sentiment covered a range of effects of disruptive forces on business, including population changes, responses to migration, and world-shaping developments such as national elections and social movements.

Commenting on the survey results, David Bach, Deputy Dean at the Yale School of Management, added, “Faculty experts in the Global Network for Advanced Management are uniquely positioned to monitor disruption—as academics, practitioners, and educators of future leaders—and to take the long view on local and global trends. While there is broad global agreement about the disruptive forces of climate change and AI, China’s economic dynamism, and lackluster global leadership by politicians, I am also struck by important variations across regions. While not scientific in its design, the survey nevertheless provides a valuable lens by leveraging our colleagues’ collective perspective on upheavals across the world economy.” 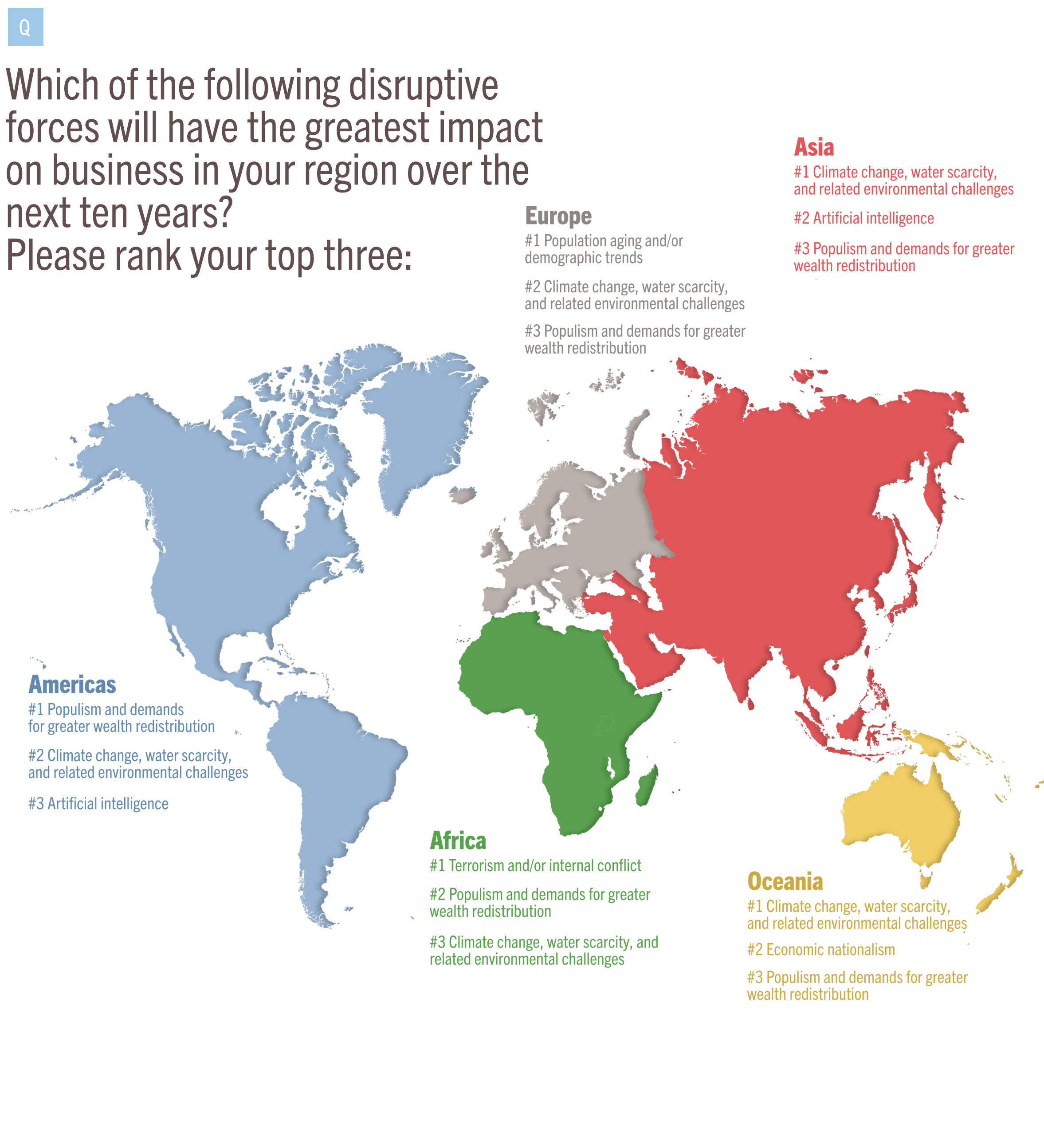 "Populism is overshadowing the real problems: aging population is a cyclical trend (and immigration has its effects), but climate change is inevitable if we overcome the point of no return."
—Prof. Matteo Vizzaccaro, SDA Bocconi School of Management, Bocconi University

“Climate change and AI are certainly very important for us in China, because they have become a part of national policy.”
—Professor at Business School, Renmin University of China

"Poor and significant infrastructure deficit, poor quality and penetration of quality education; rising incidence of terrorism (Boko Haram) and increasing insecurity (kidnappings), at the level of a national emergency; and a dysfunctional political class that is more interested in parochial, sectional, and self-interest rather than integrative national development issues: These are some of the critical, pervasive and existential issues that will have the greatest impact on business over the next 10 years."
—Prof. Osaretin Kayode Omoregie, Lagos Business School, Pan-Atlantic University

"I am increasingly concerned that our capacity for technological advance and innovation has outstripped our ability to manage the human demand for complexity, rapid adaptation, and effective collaboration in a diverse global context."
—Prof. Heidi Brooks, Yale School of Management

"Artificial intelligence will have a transformative impact in manufacturing and services. One challenge will be to take advantage of the insights from traditional operations modeling in conjunction with these new approaches. Robotics and automation will require a better trained workforce. There is a concern about 'replacing workers with machines,' but the changes are inevitable and hopefully may lead to the social benefits of a shorter work week. I believe self-driving trucks on highways will likely be seen well before self-driving cars because of the economic advantage. The automation danger is exemplified by the experience of Tesla, a company that attempted to transform the way cars are assembled using a complicated and overly automated system that is subject to breakdowns that cause production delays. A far better approach would have been to introduce automation incrementally. The problem of wealth distribution is a major societal issue particularly in the U.S. The current press-reported call by a group of U.S. billionaires for taxing the wealthiest citizens is encouraging."
—Prof. Arthur J. Swersey (Emeritus), Yale School of Management

The greatest population change is likely to result from natural population growth and decline, not from migration (whether legal or illegal). These results were uniform across the network’s regions. 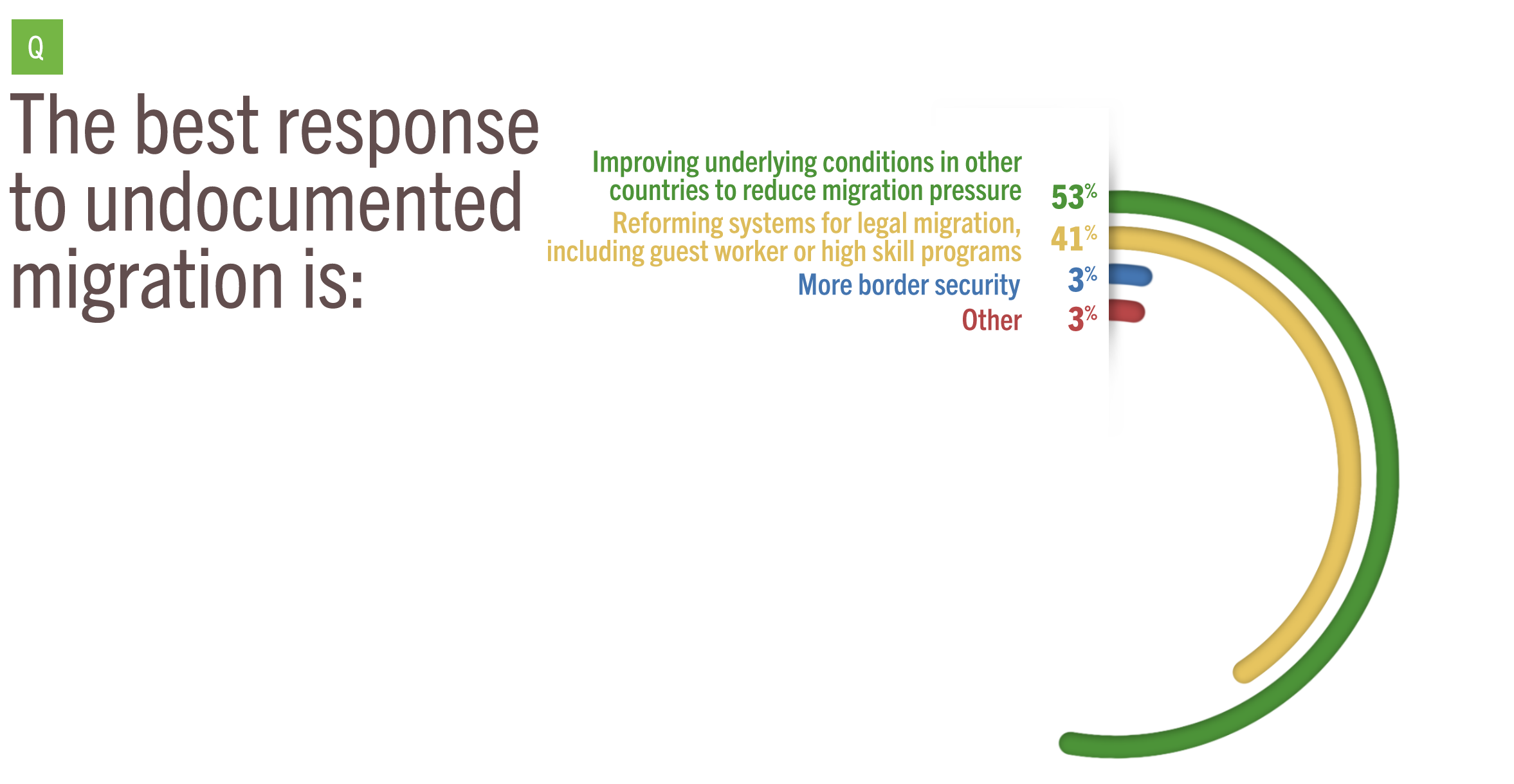 The best approach to undocumented immigration is to improve conditions in home countries. The majority of professors across the global regions supported “Improving underlying conditions in other countries” (52%), followed by “Reforming systems for legal migration, including guest worker or high skill programs” (40%). Only 3% of respondents chose “More border security.”

“Nigeria, a dominant country in the region, has a growing, restive, poorly educated, economically and socially disenfranchised youthful population (19–35 years old). If the economic opportunities continue to lag this critical growing population, the growing disaffection of this class may trigger significant social unrest and insecurity, mass migration to other regions and parts of the world at scale that may be unsustainable.
—Prof. Osaretin Kayode Omoregie, Lagos Business School, Pan-Atlantic University

"This is not an easy question, and there is no easy answer for it. The flow of migration cannot and should not be stopped. Many countries need migrant and seasonal workers. At the same time, it is our humanitarian responsibility to allow outward migration from countries/regions where there is security threat to families. Countries that need or perhaps can handle more migrants should act more actively. Those countries that need workers should have more relaxed migration rules to allow economic migrants and workers more easily get to their countries and the rest of countries should be more sympathetic about refugee families and countries that receive too many of them and each get our share of them to help humanity. At the same time, countries that are facing economic or security hardship also have to try harder improving the underlying conditions in their home countries. Mass migration out or into any country is not easy on anyone."
—Professor at Business School, Renmin University of China

"Brexit was intended to reduce EU immigration, so we will see fewer EU immigrants (if it happens) as well as some emigration of EU nationals and their families, who are being negatively impacted by the UK's "hostile environment.'"
—Professor at Saïd Business School, University of Oxford 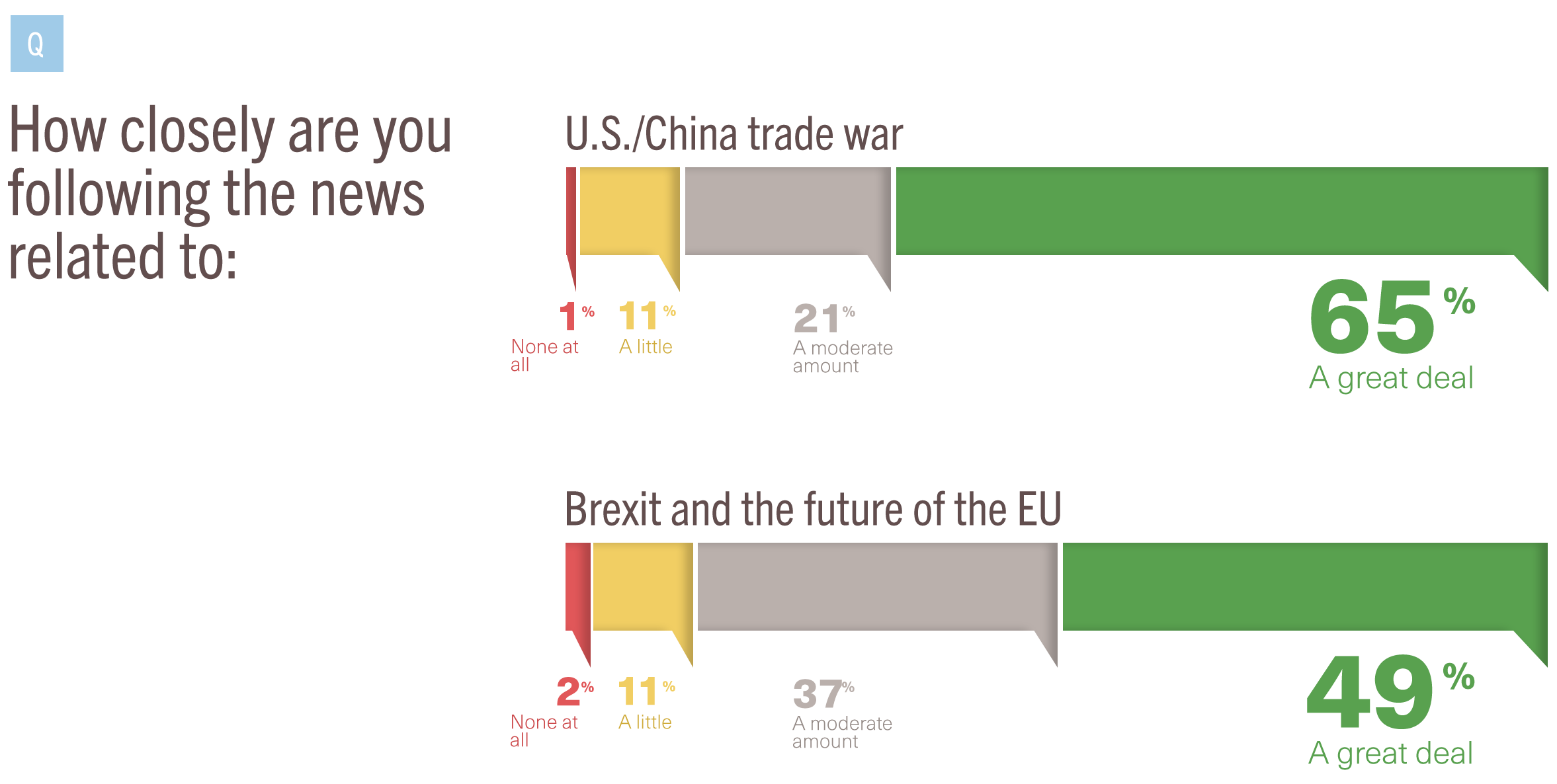 “The biggest disruptive force to business here in the U.K. over the next 10 years will be Brexit, which is a version of economic nationalism, driven by populists. Although it hasn't happened yet, Brexit is already affecting business investment and confidence. The country is in a slough of uncertainty, which the appointment of a new Prime Minister will do little to repair.”
—Professor at Saïd Business School, University of Oxford 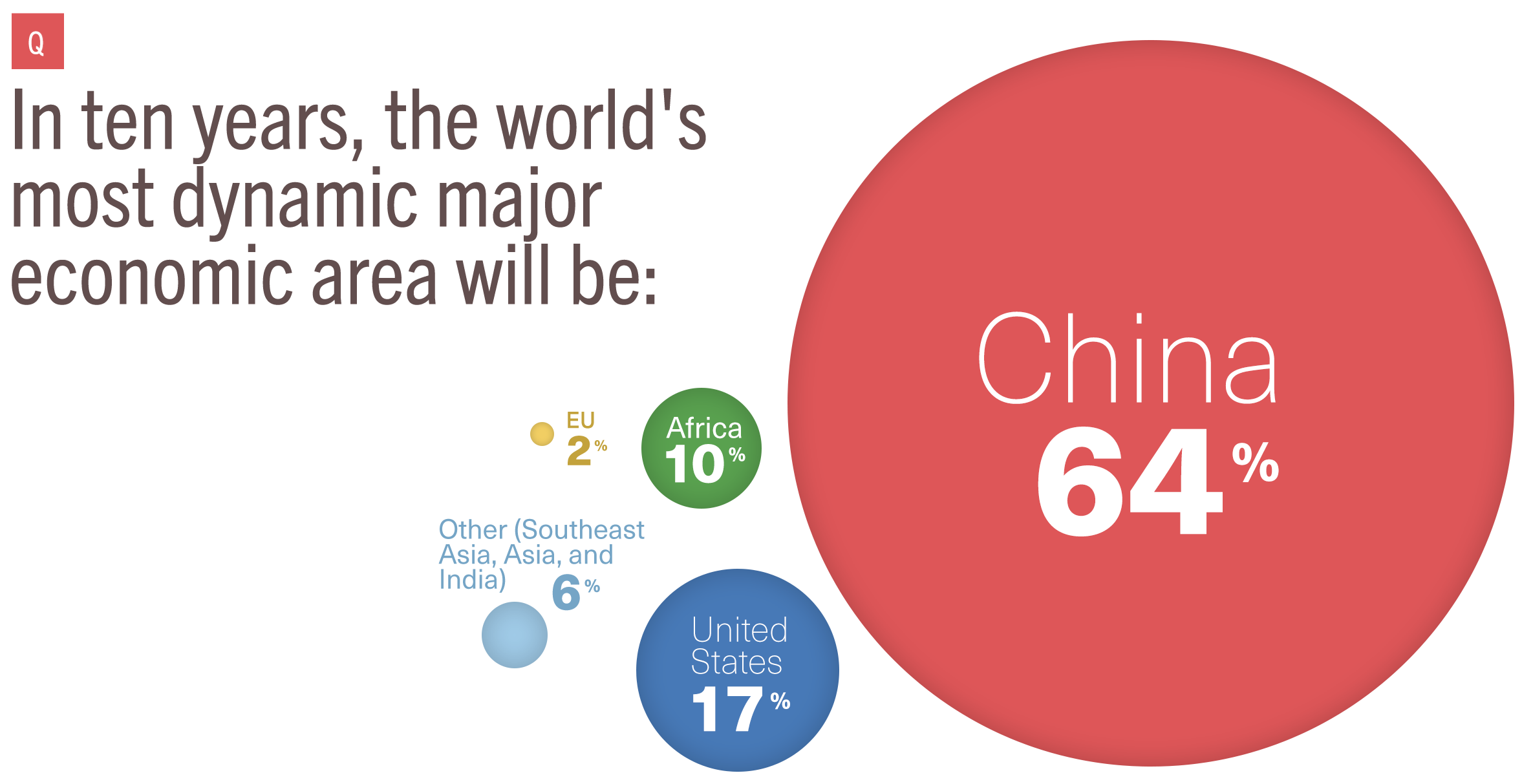 Experts believe China will have the most dynamic economy in ten years. 64% of Global Network faculty believe that China will be the world’s most dynamic economic region area in 2029, followed by just 16% who see the U.S. in this role and 10% who bet on Africa. Despite being currently the world’s largest economic area, only 2% of faculty expect the EU to be most dynamic 10 years from now. Against the backdrop of global competition, regions face distinct challenges and opportunities: “The Philippines will be hitting a demographic sweet spot soon, but digital automation and robotics may change the value of the expected demographic dividend,” noted Jamil Paolo Francisco, Associate Dean at the Asian Institute of Management.

“The Philippines will be hitting a demographic sweet spot soon, but digital automation and robotics may change the value of the expected demographic dividend."
—Jamil Paolo Francisco, Associate Dean, Asian Institute of Management

“Tech innovations are hoped to be an equalizing force for the Third World. And we are seeing significant pushes in Southeast Asia to capitalize on this potential, especially via financial investment. But can the associated social gains be sustained without commensurate human capital development?”
—Dr. Rocky Lee, Faculty and Board of Trustees, Asian Institute of Management

"The Philippines demographic dividend will manifest itself in the next two decades, as will most of ASEAN, especially the new members (Cambodia, Laos, Myanmar, and Vietnam), whose economic growth will be dramatically driven by population growth as they interlink with the larger economies of China and India.”
—Prof. Federico M. Macaranas, Asian Institute of Management

There is little admiration for Donald Trump or Vladimir Putin among the faculty members surveyed; just 2% named the American president in response to “Which global leader currently most inspires you?” with less than 1% for Putin. Only slightly less popular are Xi Jinping (3%) and Emmanuel Macron (4%). On the positive end, Angela Merkel garnered 26% of the total, followed by Pope Francis (14%) and Justin Trudeau (10%). The 16-year-old Swedish climate change activist Greta Thunberg won 8%. Votes for “Other” and “None” totaled 29%, signaling a perceived lack of global leadership; “Other” responses included Christine Lagarde, Barack Obama, and Jacinda Ardern.

"Pope Francis. His willingness to discuss and address difficult issues that have been avoided for many years is inspiring. I also find it inspiring that he approaches bringing the difficult issues to the forefront with patience as things cannot be changed in a day. His handling of these unpopular and emotional issues is done with grace and diplomacy which I applaud."
—Professor at University of Cape Town Graduate School of Business

"Even though I am not a church- or religion-oriented person, Pope Francis seems to appear more congruent with a spiritual discourse that I think we need nowadays. He seems to be honest, attempting to move a chaotic organization into a more purposeful, people-oriented organization. He has made it clear that poor people need to be heard, and it seems reasonable as a start to begin fixing many issues around the world."
—Professor at EGADE Business School, Tecnológico de Monterrey

This non-scientific survey was conducted from June 12 through July 1, 2019, and included all 30 Global Network schools.

Explore more results from surveys and other forms of networked inquiry, including a Global Network Faculty Flash Survey on climate change.