Sauder School of Business Professor Darren Dahl is a well-known name among consumer behavior researchers and ranks second in the world for publishing in top marketing journals. In his latest study, he uncovered a social stigma faced by people on welfare when they're shopping. 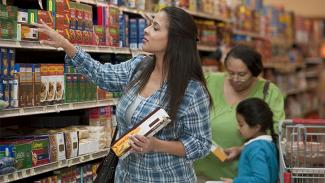 Most people who make ethical purchases, such as buying organic food or environmentally friendly cars, are seen as more virtuous—except for those receiving government assistance. If ethical shopping is funded by welfare checks, those shoppers are judged as immoral for taking advantage of public generosity.

“People on welfare tend to be seen as undeserving of more expensive options and of wasting taxpayers’ hard-earned cash,” said Dahl. “We discovered a double standard where people are judged differently for making identical choices, depending on where their money comes from.”

Dahl and his co-authors were curious about the interaction between two prized values: making prosocial choices and thrift. They found that people reliant on government assistance are only praised when they’re frugal, and are seen as less moral if they go for ethical but more expensive products.

In a series of five studies, more than 1,300 participants in the United States were asked to judge people on measures of morality based on their grocery lists (either including organic foods or not) or their chosen rental car (either environmentally friendly or not). When choosing a more expensive ethical product, those on welfare were seen as less moral while more wealthy shoppers were seen as more moral.

The fifth study found that people were also less likely to donate to a charity if the meals it provides are organic.

Dahl, the BC Innovation Council Professor, senior associate dean of Faculty at UBC Sauder, and director of the Robert H. Lee Graduate School, is part of UBC Sauder's Marketing and Behavioral Science division, which ranks sixth in the world for marketing research. Specializing in product development, creativity, social marketing and emotions in consumptive contexts, he teaches in the MBA, International MBA, PhD in Business Administration, and Executive Education programs at UBC Sauder.