Crowdsourcing and Chaos: How Social Media Can Save the Day 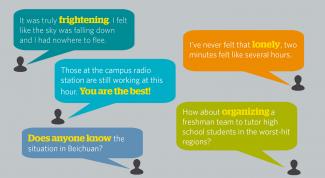 When a powerful earthquake devastated China’s Sichuan province in 2008, the disaster was too catastrophic for authorities to stay on top of everything.

But fortunately for the students at one university in Chengdu, they didn’t need the school’s administration to tell them what to do – they organized themselves, showing the power of social media for crisis control.

Sauder Assistant Professor Ning Nan investigated the conversations on the students’ online discussion forum, and found a striking example of self-organization, as the students rallied together at a frightening and confusing time to offer one another support, valuable information, and calls to action.

“When I first looked at the data, I looked for the leaders in the group – but I was surprised to find there weren’t any, not even unofficially,” she says, calling the results a break from the traditional mentality about organizational order. “When we see intelligent behaviour of an organization, our intuition is always to look for the leader giving out instructions.”

“No one stepped up to take charge, but as they all pitched in, a collective order took shape. Basically, the whole was more than the sum of its parts,” she says.

She found that the actions of the students unintentionally mimicked good crisis management protocol, as established by academic literature, by mirroring the four phases of sensing, understanding, deciding and evaluating – even though the students weren’t consciously planning it all out.

First came the visceral emotional responses, followed by more thought-out discussions of useful information, rumour busting, and reflections on their role as helpers and not just victims. A few days after the earthquake, in what Nan called the third stage, they began taking action to figure out how they could help with disaster relief. The students leveraged the social media platform by replying to ideas they liked with a “ding,” which acted like a vote and brought good ideas to the top of the message board. Finally, the conversations turned towards evaluating their response to the crisis, and collectively moving forward to achieve closure.

“Organizational theorists tend to focus on fostering leadership in a few elite members,” Nan says. “So this shifts the focus to the ordinary members, showing that if you mobilize them and allow them to organize themselves, that can be just as good, if not better than a top-down approach.”

She says that this approach is only now becoming possible thanks to social media. “It’s so much easier to tap into the wisdom of crowds,” she says.

She says the main thing the study highlights is that we can’t take technology for granted. “Social media isn’t just some utility. It can fundamentally change how we live and how we work,” she says.

Nan’s study, Harnessing the Power of Self-Organization in Online Community during Organizational Crisis, co-authored by Yong Lu of Pennsylvania State University, was recently published in MIS Quarterly. The researchers analysed 89,596 posts made by students on the online discussion forum of a university in Chengdu, 80 km away from the epicentre, in the week before and the two weeks after the earthquake. They coded the posts into different categories to identify patterns in the students’ conversations.