Dispatches from #GNW2014: A Community of Social Entrepreneurs

Students visiting the Asian Institute of Management for Global Network Week visit a “farm” growing a variety of social enterprises.

After a career spent as corporate executive, Antonio Meloto wanted to find a line of work that could produce lasting change in the Philippines.

He had seen that if Filipino citizens were born poor, they likely would stay poor. If they entered the business world, it was likely through a job with a large multinational corporation. Rarely did they seek an entrepreneurial route to make change for themselves. So he launched Gawad Kalinga, which translates to “give care,” in an attempt to reverse the trend.

“I wanted to know: how do you create wealth that is sustainable for a generation of people?” Meloto said. “I’m not sure we have all of the answers, but I do know this: something is working.”

Students from the Global Network for Advanced Management visited Gawad Kalinga’s GK Enchanted Farm today as part of the Global Network Week module on ecotourism hosted by the Asian Institute of Management. The farm is a social entrepreneurship-driven community that encompasses a host of businesses including a bamboo bicycle company, a plush toy distributor, and a mushroom farming center. Students are spending two days there, learning about its operations and working alongside residents. 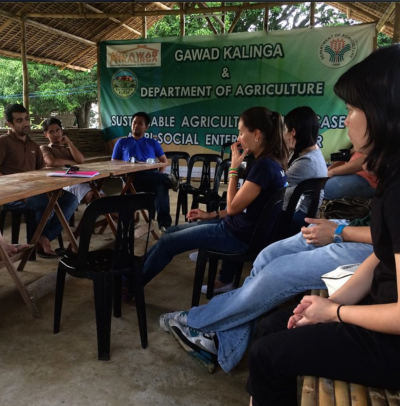 Meloto told students that Gawad Kalinga started as a project inside Manila in 2003, an attempt to reduce poverty in the city’s poorest slums by providing skills training to help residents find work in a variety of fields. Meloto convinced companies to donate land where local residents could be trained to build their own homes and contribute to their own community. The project has led to 3,014 homes being constructed so far.

“It’s a numbers game. If you show big corporations that you can create a big brand that can influence a large number of consumers, they will participate,” Meloto said. “So we had a Procter and Gamble GK Village. Then, we had a Unilever Vitality Village, and then a Colgate one and so on. When you talk to CEOs, you need to talk to them about vision and market penetration, and the money will come.”

The farm itself has become an ecotourism attraction, bringing in foreign tourists, curious potential investors, and middle- and upper-class Filipinos. Professor Gaston D. Ortigas of AIM said that ecotourism has created an additional stream of revenue for funding future social entrepreneurship projects.

“In its own way, it’s become a sustainable model,” Ortigas said. “The more people who visit here, the more money there is to invest back into the local businesses.”

Matthew O’Rourke is blogging this week from the Asian Institute of Management’s Global Network Week module on ecotourism.