Will Society Break Down When Women Earn More Than Men?

Relationships may be even happier when females pull in the big bucks, according to a study by economist Gigi Foster of UNSW Business School. 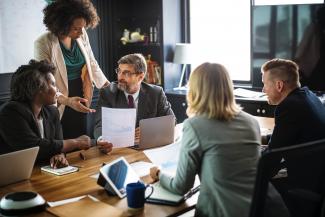 For just about as long as women have been stepping into the main breadwinner role in households there have been concerns about the possible dire effects on relationships.

Women wearing the pants while men take a back seat as earners has often been seen as risky: disrupting partnerships, increasing divorce rates, and even fraying the social fabric.

New research, however, reveals primary breadwinner norms are transforming as more roles reverse, and relationships can even be happier as a result, according to economist Gigi Foster, a professor at UNSW Business School.

In the study, "Does Female Breadwinning Make Partnerships Less Healthy or Less Stable?", Foster and Leslie Stratton of Virginia Commonwealth University examine the effect of women’s primary breadwinning on the health of a marriage or de facto relationship.

Their point of departure was a famous paper published in the U.S. in 2015 by Bertrand, Kamenica, and Pan (BKP), which found a negative association between women earning more than their husbands and marital stability and satisfaction.

“They found that when women earned more than their husbands in mixed-gender married partnerships in the U.S., marital satisfaction was lower and the risk of divorce was higher,” Foster says.

“But they were using data from a generation or two ago, only from the U.S., with no separate examination of cohabiting couples, and they also didn’t have any data on the mechanisms that might be behind this link.

“There was just a conjecture that the higher risk of divorce and dissatisfaction was due to stress within the partnership caused by the violation of a male-breadwinner norm,” she adds.

“Leslie and I were interested in two things. First of all, we didn’t believe this result would hold in more modern data, and we hoped it wouldn’t—both of us being  women who out-earn our husbands. But secondly, we wanted to see if the mechanism that was being suggested here was likely to be the true mechanism.”

As it turned out, the pattern found in BKP did not emerge in the new research.

“Our headline finding is that, in general, this positive relationship between female breadwinning and marital dissolution no longer exists,” she says.

Because the study also examines whether there is lower satisfaction or higher stress in the partnership when women out-earn their men, it was important to have multi-dimensional measures of marital quality and satisfaction.

Along with finding data that was up-to-date, they also needed it to have a longitudinal element in order to track separations, and to examine both married and de facto couples in multiple countries.

The Household, Income, and Labour Dynamics in Australia (HILDA) survey is perfect for this kind of analysis and includes a suite of measures related to relationship quality and satisfaction. The authors paired the HILDA data with a recent longitudinal data set from the NLSY97 project in the U.S., and applied the same analysis to the data from each country.

Foster and Stratton found not only a lack of overall association between female breadwinning and measures of relationship quality and satisfaction, but even some scattered evidence that Australian men are happier with partners who out-earn them.

There were some exceptions. For a particular cohort—in particular, younger and cohabiting partnerships—there is some evidence of a higher risk of dissatisfaction (particularly on the woman’s side) and/or relationship dissolution when the woman earns more than the man.

But this may be due to market dynamics rather than discomfort with female breadwinners.

“What we put that down to is that in any society where there is an average gap in wages such that men out-earn women, people will naturally be looking to that gap as a benchmark (whether consciously or unconsciously),” Foster says.

“If they are shopping around for partners and they haven’t yet invested heavily in a particular partnership, and they notice this guy is not earning as much as them, they may think at some level, ‘maybe I can do better.’”

According to Foster, this is a market-based mechanism that is not about disliking the situation of out-earning your male partner in an abstract sense, but more about a feeling that in the current market, they could shop around and improve their situation.

It’s a market-matching phenomenon you would expect to see in any market—but you don’t see it with older partnerships or ones with kids, perhaps because there has been more investment in those relationships.

In Australia, the other group showing evidence of lower relationship satisfaction when women out-earn their partners was cohabiting partnerships in which the man had a low level of education. That may have something to do with social norms taking a longer time to shift in these partnerships, says Foster.

It’s also important to note that there could be a range of reasons why some men are happier with a higher-earning partner that are not just about income. There are so many different ways in which partners compensate for one another’s weaknesses and strengths.

“I think part of what is going on is that those partnerships in which she does out-earn him have other ways in which he gives back more —and they have a happier partnership because they have worked it out.

“As in many economic studies, we are just looking at one measure of ‘equality’ and balance in a relationship, but there are many other important dimensions behind the scenes.”

The shift in norms reflected in the research doesn’t spell future relationship disaster for low-earning men either. Younger women trading up is a market dynamic, but it doesn’t mean you can’t win as a lower-earning guy, Foster says.

“They just have to offer other things. Again, we are looking at one measure here and there are crucial aspects of a partnership that we can’t see in our data, like the amount of social and emotional support you provide, and how good a lover you are, and all the other things that go into making a good partner.

“So it’s not hopeless for men who don’t pull in a high wage, but it does mean they need to offer something else in order to remain competitive.”

The fact that young women may see partnering in the modern era as a transactional thing may seem unromantic, but Foster believes it is fundamentally positive because it indicates that women are in control of their choices, have access to more partners, and are not just going to comply with others’ expectations.

Women are essentially looking at relationships and partnering as economic decisions for themselves.

“That’s what we want market participants to do because that’s what drives efficient markets—in this case, better partner matches. Better matches are unlikely to lead to more divorces; quite the opposite.

“Relationships appear to be adjusting to the idea that different roles can be played by different genders, and that those roles are more fluid.”

That’s a healthy outcome, she adds, because more efficiency can be achieved when people who are better at earning money—no matter their gender—can sort into jobs that let them earn it without worrying they are violating a norm and in consequence could be stressed or stress their partner.

As the paper concludes, the evidence suggests that norms around who plays the breadwinner role have shifted over time, with implications for both men and women. And despite concerns about the impact on relationship dynamics, the outcomes, in many ways, are win/win.

This article originally appeared in BusinessThink.