A Frustrating and Illuminating Process: Global Network Experts Discuss the State of Brexit

On April 12, a panel of experts from the Global Network for Advanced Management discussed the prolonged, contentious Brexit process and what the future likely holds for businesses and citizens with ties to Britain. 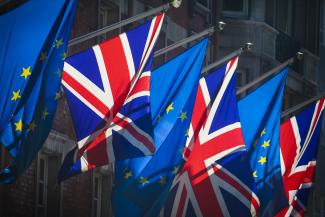 The 2016 referendum known as Brexit gave people in the United Kingdom a seemingly simple choice: remain part of the European Union or leave. But the ramifications of the 52%-48% vote in favor of leave have been anything but simple, as the British government has struggled to build support for any plan and businesses have been kept in limbo.

On April 12, a panel of experts from the Global Network for Advanced Management considered what can be learned from the process to this point and what the future likely holds for businesses and citizens with ties to Britain. The discussion was held on a day that had been the second deadline to reach an agreement and avoid a chaotic no-deal withdrawal, until the EU granted the UK an extension until October 31.

The prolonged, contentious Brexit process has its roots in the conditions of the original referendum that resulted in a “leave” vote, said Janet Smart, a reader in operations management at Oxford’s Saïd Business School.

“People didn’t really understand what it was, I believe, that they were getting into,” she said. “The debate was all around finance and economics, and they didn’t think much about the operational impacts of Brexit.” Smart pointed to the question of how to handle the Irish border and the potential impact on supply chains and manufacturing as two examples of under-considered operational issues.

Tim London, head of organizational innovation at the University of Cape Town Graduate School of Business, agreed that the current gridlock is a result of lack of clarity. “The challenge now is, what does ‘leave’ mean?” he said. “There’s a hashtag that #leavemeansleave; when someone defines a word with that word, they don’t know what it means.” Naturally, those who interpret “leave” to mean a “hard” Brexit, which would sever existing trade agreements, and those who think it means preserving freedom of movement between the EU and Britain don’t agree on the best next steps.

Arturo Bris, who is a professor of finance at Switzerland’s IMD and director of the IMD World Competitiveness Center, explained that his view of Brexit came from his position as a part of the EU. His primary concern, he said, was whether Brexit will be good or bad for the EU. “My opinion now is that it will be good for the EU. If I were able to vote, I would have voted yes,” he said. As Bris sees it, the negotiations between the EU and Britain have strengthened bonds among European countries and extended the reach of the EU to the east. “I’m not optimistic about the whole Brexit process, but I am optimistic about the EU.”

The difficulty in reaching political consensus about what Brexit means has illuminated the motivations behind the leave movement. David Bach, deputy dean at the Yale School of Management, described Brexit as part of a populist wave that can be seen in other recent political movements around the globe. “What this tells us is this wave of populism was much more fueled by rejection of what is than support for a new project,” he said. The fact that a growing share of the voting population is expressing discontent “has created a potential for enterprising politicians to channel that discontent into whatever their preferred political platform is,” said Bach. He pointed to the examples of the election of Donald Trump in the U.S., Emmanuel Macron in France, and Jair Bolsonaro in Brazil, as well as the Catalonian separatist movement. “There’s a large number of people who feel we have to blow something up…but no agreement whatsoever about what should replace it.”

Like other Brexit commentators, the panelists invariably made their back to the unanswerable question: what next? As Conservative Prime Minister Theresa May negotiates with Labour leader Jeremy Corbyn to find a plan that will satisfy a majority of Parliament, it’s not clear what shape Brexit will take. There’s even the chance that a second referendum or other political shift could lead to a reversal of course, so that Britain remains in the EU. Tim London said that any attempt to predict the exact course of events would be “crystal ball thinking.” The six-month extension of the deadline opens up many new questions—for example, how elections in Britain will change the dynamic. The additional time also lowers the pressure for a deal and may make compromise less likely. London felt comfortable making one prediction: nothing will be decided until the deadline is, again, upon us: “Knowing human nature, nothing will happen before September.”

One of the big potential unknowns is the possibility of a second referendum. Janet Smart argued that such a re-vote would be justified for two reasons: first, there wasn’t clarity in 2016 about what Brexit would mean; second, that “malfeasance” in the leave campaign rendered the vote unreliable.

Whatever happens in the political process, business will suffer through more uncertainty. Tim London said, “Nature abhors a vacuum; business leaders abhor a vacuum at least as much.” He outlined the difficulty of making long-term strategic plans when you don’t know what tariff levels are likely to be or even whether your employees will be able to stay in the country. “Do we fill warehouses or hope for the best? Negotiate different deals with suppliers?… If you invest in any one of these outcomes, then you waste resources on planning.” He added that the impact was likely to be greatest on small and midsize businesses. “They can’t afford to guess wrong. They can’t afford to guess.”

Smart agreed about the likely negative impact on small businesses, and added that the automotive industry is also likely to be hurt by Brexit. “Big auto manufacturing companies represent close to a million jobs that are slowly going to be disappearing,” she said.

The City of London is currently the dominant financial center in Europe, and many observers have suggested that it’s likely to lose its preeminent place if Britain separates from the EU. The panelists agreed that it was likely that some financial activity would shift to cities on the continent, but it was an open question whether any other city would rise to become a true rival. “London as a financial center will be challenged if there’s a consensus in the EU that there’s a new financial center,” said Bris.

What will Europe look like on November 1, the day after the new deadline for withdrawal? The panelists discussed the key indicators that they would look for in order to understand the impact of Brexit.

Janet Smart named “queues and delays” as a telling indicator. “Will there be queues at the supermarkets? Will we see empty shelves? Will things get held up at the border?”

Tim London pointed out that one of the arguments in favor of Brexit was that the country would be able to make its own trade deals for the future. “How true is that? Are they really willing to redo all these trade deals? … What’s available in the shops for everyday people? What’s available and what’s the price?”

The panelists said the whole divisive, fraught process has strained democratic engagement and cast doubt on the reliability and expertise of political institutions. Janet Smart described the frustration of some who voted in favor of Brexit more than two years ago yet haven’t seen it happen, and have concluded that “‘if  you vote, it doesn’t matter.’… So it’s turning people off from the democratic institutions, and that’s going to be very difficult to repair.” Arturo Bris said that while the process has been difficult, it reflected a commitment to rule of law in Europe. “I’m extremely happy that we live in a democracy with rule of law. And at the end of the day this has been a process where free people voting and following the law have decided something, and the struggle to make it happen reflects how strong we are as a part of the world that believes in democracy.”

David Bach argued that business schools and business leaders need to help address populist disaffection by offering productive solutions. “This yearning for solutions is real,” he said. “People will continue to look for leaders who inspire and reassure and give hope and have real answers… I think it’s incumbent upon us as educators in business schools to engage business leaders around those questions—they can’t pretend it’s not real—to forge dialog across sectors, to find solutions that address the disruptions that AI and automation will bring, that paint a real path to a more sustainable economy that saves our planet without putting the jobs of millions at risk.”

Prof. David Bach on the role for business leaders to address populist concerns.

Prof. Tim London on how the Brexit process could be damaging.

Prof. Arturo Bris on the necessity of cultural union for a successful economic union.

Prof. David Bach on the importance of Europe engaging with the rest of the world.

Prof. Janet Smart on the risk of losing democratic legitimacy.

Prof. Arturo Bris on how Brexit may strengthen the EU.