Robots at Your Service

As technology becomes better, smarter, smaller and cheaper, in industries as diverse as healthcare, banking and entertainment, more and more services will be shifted from humans into the hands of robots. NUS Professor of Marketing Jochen Wirtz examines the implications. 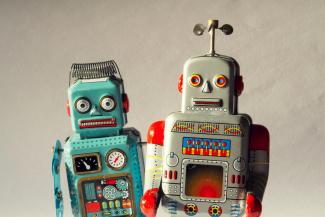 At the annual CES technology show in Las Vegas in January, South Korean tech giant Samsung unveiled a family of robots designed to assist in a range of services from healthcare to retail.

The new Bot line, as Samsung has dubbed it, offers a suite of AI-powered robotic assistants that can carry out tasks such as checking vital signs, administering medication, monitoring air quality, and helping out shop assistants.

While the new Bots likely won’t be on sale for a while yet, they offer a taste of the revolutionary changes set to sweep the service sector.

Indeed, within less than a decade we can expect that rapid advances in technology will fundamentally transform the service experience, with robots—both physical and virtual—taking on many frontline service roles.

As technology becomes better, smarter, smaller, and cheaper, in industries as diverse as healthcare, banking, and entertainment, more and more services will be shifted from humans into the hands of robots.

Equipped with cameras, sensors, and speech recognition, robots will increasingly be used to interact, communicate with, and deliver service to customers. Supported by advances in data analytics, artificial intelligence, and mobile and cloud technology, these robots will be able to sense their environment, learn from encounters, and make autonomous decisions.

This means the next couple of decades will likely prove a watershed for the service sector, on a scale comparable to the impact the Industrial Revolution had on manufacturing in the early 19th century.

In a recent study with colleagues at universities in the UK, U.S., Germany, and Australia, we looked at the social and ethical implications of this brave new, robot-driven services world—and what it may mean for the people currently working in it.

A key point to clarify is that the rise of this new generation of service robots does not mean an impending takeover by an army of Terminator-style machines. In fact many of the service robots of the future will be virtual rather than physical, similar to the Siri, Alexa, or Google Home services many of us have and use in our homes and smartphones already.

Increasingly these virtual robots will be sophisticated interfaces, connected to vast databases of customer information, enabling them to provide highly personalized and customized service at scale and at negligible cost.

Indeed, in the next few years, one of the most crucial developments is likely to be the emergence of robots capable of interacting with human customers in a natural, or almost natural, manner.

One of the leading players in this field is Google Duplex, which uses machine-learning technology to engage in natural conversations as it carries out real world tasks over the phone.

Recordings of Google Duplex in action, making restaurant reservations or booking hair salon appointments, certainly sound convincingly natural. But placed into a deeper service context, a critical factor in just how far robots take over will be whether robots can feel real emotions and show genuine empathy and concern for customers.

After all, such understanding and authenticity are at the heart of the service experience.

Already some advanced robots have the capability to detect different emotions in humans and respond to them. Yet this response is pre-programmed, rather than a genuine emotional consciousness.

As a result there remains considerable debate surrounding whether robots can be effective in providing emotional and social services at the level humans can.

In theory, if robots were ever able to convincingly match human emotions, all human service provision could be replaced by non-human frontline staff. But this is unlikely to happen in the foreseeable future as robots cannot truly feel emotions such as joy, excitement, or empathy. This means humans will still be needed for many service roles that require deep emotional feelings.

Today, robots in more routine or mundane service situations—a bank teller or ticketing clerk, for example—already can mimic surface-level emotions to a high level. Being robots, they will be able to do this consistently, at any time of day or night, and without tiring.

However, having true feelings when interacting with customers and out-of-the-box thinking at a similar level to that expressed by humans is likely to be much further off. Customers generally understand that computers do not have feelings.

In the recent Hollywood movie Passengers, for example, the robot bartender played by Michael Sheen gave counseling and advice to the human space travelers. But, even as the robot was damaged and lost part of its face and body, the humans displayed no emotions toward him. In other words, while surface-acted emotions are noted, deep inside customers are likely to know that these emotions are not real. Likewise, customers are unlikely to respond to robot-displayed emotions as they would to heartfelt and authentic emotions from human frontline employees.

Cognitive and analytical tasks with low emotional or social complexity will increasingly be taken on by robots, while services that are mainly social in nature and require truly felt and displayed emotions will remain mostly delivered by humans.

What we will see in the future is the greater likelihood of human-robot partnerships in delivering service. Robots already are outperforming humans on analytical and cognitive tasks, while humans will remain important for the emotional tasks.

One area where this will be key is in healthcare and medical services. A service robot, for example, will be able to rapidly map all patient data and symptoms against its knowledge base and provide probabilities of even the rarest diseases for a doctor to consider and explore further.

Likewise, a robot could undertake relatively simple processes such as taking a patient’s blood pressure, assessing other health indicators, and preparing medication, leaving a human nurse to focus on soft skills such as displaying empathy, caring, and affiliative communications to put the patient at ease.

Nevertheless, as we become more and more engaged with robots, issues of privacy, personal liberty, and security will need to be addressed.

With service robots likely to emerge across a broad range of industries, concerns will grow about the risk of systems being hacked or accessed remotely by criminals seeking to cause physical harm or use the information they acquire to blackmail individuals. This will become all the more pressing as robots process and store ever larger amounts of sensitive data.

A further possible concern is that governments could access this data, raising implications for individual privacy that will have to be negotiated and resolved as robot interactions become more common.

At another level there are also likely to be concerns about dehumanization of service due to the minimal emotional involvement of robots. For example, fully replacing workers in elderly care homes with robots could deprive people of human contact. Moreover, it remains largely untested how patients will react to robot-provided care.

Finally there are also growing worries about the implications for human employment as the uptake of robots reduces the availability of well-paid jobs.

The impending robotic revolution in the services sector will offer many exciting opportunities but also significant social challenges that will need to be addressed. Certainly many service jobs will be lost, while others that do not yet even exist are likely to be created. However, previous experience has taught us that it is unlikely that the latter will balance the former.

With this in mind, governments and societies will need to prepare to face some difficult questions. Loss of wages will be an obvious challenge, but there will also be issues of security, human dignity, self-respect, and role in the community among other factors that will need to be addressed.