Office Humor: Why the Joke’s on You

Humor is a risky business: what one employee finds funny can be offensive to others. Leaders need to be careful and walk a tight line when they decide to employ humor in the office space. 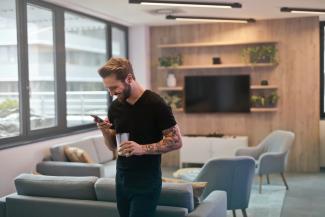 What makes a joke funny? It’s an age old question – some say it depends on timing, location, delivery, the audience or any number of other factors.

For leaders humor can be a powerful tool. Several studies have shown that building humor into the working environment doesn’t just make employees feel better, it makes them more engaged, creative and collaborative, boosting productivity and eventually profitability.

Likewise humor has also been shown to boost an individual’s status, with executives who put laughter and jokes into their work enjoying more support for their initiatives, motivating their followers better, making more money and getting promoted more quickly.

But humor also comes with risks. What one person finds hilarious another may find deeply offensive, even if that was not the intention. How jokes are received can have a major impact on a leader’s position as a role model.

This is because the actions a leader takes sets the tone for the workplace. What the leader does or the way the leader acts is observed and interpreted by followers who adjust their own behavior accordingly.

In a recent study we sought to put workplace humor in this context, and understand the impact that jokes a leader makes has on the behaviors and actions of his or her followers – both beneficial and negative.

For our study we applied the concept of benign violation theory (BVT), developed by the Humor Research Lab (HuRL) at the University of Colorado, Boulder.

In a nutshell, the theory says there are three conditions for a situation to be humorous:

Taking the concept of BVT we merged it with another theory known as social information processing, which focuses on how employees interpret their leaders’ actions to set the tone for behavior considered as “acceptable.”

Then, using surveys of two separate groups of workers in China and the United States, we looked at how a leader’s jokes signaled the acceptability of norm violations in the workplace. If that acceptability was seen to be high, for example, it could lead to followers to engaging in increasingly deviant behavior.

What we found showed the humor can be a very mixed blessing.

On the one hand it can improve how team members view their relationship with their leaders. In turn leads to better work engagement among followers, making them more likely to stay in their job, work harder, be more enthusiastic and more productive.

However, leader humor can also act as a powerful signal to team members over the acceptability of norm violations. In turn this can develop into increased incidents of deviant behavior.

This could take many different, for example coming into work late, ignoring a boss’s instructions, taking longer than entitled breaks, sharing confidential information, falsifying expense claims or drinking alcohol on the job.

It could also result – either separately or simultaneously – in increased interpersonal deviance. For example team members spreading malicious gossip, acting rudely, or making potentially offensive ethnic, religious or sexual remarks in the workplace.

From our study we found that an important influence from the leader was the degree to which leaders used aggressive humor, such as teasing members of staff or telling dirty jokes. Leaders seen as pushing this more risky humor were more likely to pave the way to deviant behavior among their followers.

But don’t take this as a killjoy message. The lesson here is not that leaders should stop telling jokes at work. The evidence remains clear that humor is an important tool for bosses to successfully motivate their teams to achieve greater performance.

Nonetheless our study reinforces the message that leaders should primarily be mindful of their status as role models, with their actions serving as social cues for followers that can result in both positive and negative consequences.

Because of this bosses need to take care in how they portray themselves to their teams through their interactions, increasing their self-monitoring skills of what types of humor are appropriate in different situations.

A joke may start out as “just a joke,” but its impact can have far reaching consequences.