Bike Shares: A Balance Between Regulation and Innovation

Professor of Finance, Economics and Real Estate National University of Singapore head of the Department of Finance NUS Business School 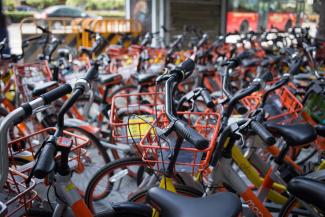 The bike-sharing phenomenon that began in China has quickly spread to cities around the world.

For some the availability of bikes on demand has been a boon to their daily commute with the added benefit of a bit of exercise thrown in. Yet there have also been complaints about indiscriminately parked bikes, broken or vandalised bikes and inconsiderate cyclists.

In Singapore, a deluge of share bikes on the streets has sparked a backlash from some residents upset at the “eyesore” and “clutter” in a city usually renowned for its orderliness. In response the government has moved to impose regulations on the use of share-bikes and warned companies of heavy penalties if they or their customers fail to comply.

In response, one home-grown firm – oBike – announced it was throwing in the towel, saying it was unable to meet the tougher licensing rules.

The rapidly growing industry of bike-sharing presents an innovative solution to the globally pressing problem of urban transportation and offers several significant spin-offs. These include the obvious health benefits of getting more people to ride bikes, as well as the reduced congestion and pollution derived from moving people away from motorised transport.

In my own recent research at the National University of Singapore Business School, I found that about 11 percent of public transport journeys in Singapore are single-stop journeys. Reducing these by encouraging people to switch to bikes for short trips would reduce congestion and speed up commuting times.

So what signals do the new regulations send about Singapore’s openness to innovation?

A culture of innovation

To thrive and progress, Singapore needs to nurture and drive a culture of innovation and encourage ideas that have a significant impact on society. Innovations inevitably bring with them positive and negative externalities – the term economists use for the public consequences of a business activity that are not fully reflected in the price.

Singapore’s government has made much play of this, and innovative thinking is rightly being put at the heart of the nation’s educational push. To thrive and progress, Singapore needs to nurture and drive a culture of innovation and encourage ideas that have a significant impact on society.

This means being open to innovators and open to different ways of thinking. It requires flexibility, easing up on the leash, acknowledging that new ideas take time to develop and evolve, and perhaps require the country to step – at least a little way – outside of it’s comfort zone.

In the case of bike sharing, whilst some may find the profusion of bikes an eyesore, more could certainly be done on the part of government to internalise the externalities of this new industry and alter the behaviour of consumers.

Regulation of varying degrees is necessary because industries cannot self-regulate – their primary incentive is to make profits, rather than to simply increase public welfare. Some industries require more stringent regulation than others. Banking, for example, can have destabilising effects on an entire economy – unregulated financial “innovations” can have far reaching and significant consequences.

Likewise, utility firms also require regulation because of the huge fixed infrastructure costs that are inherent to the business. These reduced competition and, without regulation, could give a few players the power to effectively set their own prices.

However, in other cases, there are innovative industries and ideas that bring with them many positive externalities. In the case of bike sharing, I would argue that the advantages significantly outweigh the drawbacks – indeed, they match closely with government aims of making Singapore a car-light society.

Principles of economics teaches us that aligning incentives can create a win-win situation. Research has shown that small subsidies can change behaviours, developing over time into such an ingrained habit that ultimately subsidies are no longer required. Thus, cheap bike-sharing options today might shift consumer behaviour so that they become used to riding bikes for the “last mile” connection to their destination, to the extent that they are later prepared to pay for bike-sharing services priced at sustainable levels.

Singapore is globally-renowned for its orderly urban planning and development. But too much of a preoccupation with order and discipline can stymie creative thinking and shackle innovation.

Rather than imposing undue and unsustainable costs, regulators need instead to think of creative approaches to tackle negative externalities by incentivising optimal behaviour and usage. In the case of bike-sharing, this might take the form of targeted subsidies or rebates that encourage users to park responsibly and in designated areas.

Responding to the challenges posed by innovative businesses requires innovative thinking. It means being open to different perspectives and broadening minds – among regulators and also among the general public.

In cases where a particular innovation generates many positive externalities, the role of the regulator should be to support and manage its development and progress, as well as its wider impact. I would go one step further and argue that such innovations could even be subsidized as they are good for the country.

Instead, with bike sharing, what we have seen is a response that pushed them out of the country. The silver lining might be that other bike sharing companies such as Mobike are still operating and so I would encourage the government and regulators to nurture them and help them become a stable part of the Singapore eco-system.

Given Singapore’s small size, transportation will certainly become an increasingly pressing problem, for which bike-sharing promises to be at least part of the solution.

Yet when it comes to innovation, Singapore’s diminutive stature is also a strong advantage. It provides a manageable stage on which new ideas can be tested and refined. It also offers an easily monitored space where, if things go wrong, they can be easily and quickly addressed.

But we must also remember that innovators and entrepreneurs are a rare species. Due to their flexible, risk-taking and open-minded approach, they also tend to be footloose – if the environment doesn’t suit, they will go to somewhere that does.

The broader lesson is that we must carefully consider how regulation and innovation can work together, rather than against each other.

Otherwise, when it comes to encouraging and nurturing innovators, Singapore will be at risk of losing its competitive edge.