Bitcoin and Blockchain: Opportunities in Asia 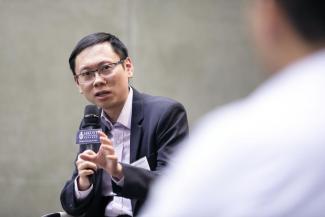 What has been the impact in your country/region of increasingly popular cryptocurrencies such as Bitcoin? What are the greatest hurdles?

The emergence of cryptocurrencies and especially Bitcoin has aroused the interest of many investors in Asia Pacific. Because of the promise of the underlying blockchain technology, many people consider Bitcoin as a rising digital currency that bypasses banks and financial institutions, and hence can help save costs and avoid failure of a centrally governed currency system. Cryptocurrencies and initial coin offering (ICO) also present a new means of fund raising to support business innovations and new ventures.

The impact of this development is two-fold. First, it sketches a path towards an autonomous digital payment system that skips intermediaries and supports end-to-end currency transactions. This was not possible previously, but blockchain makes this feasible with Bitcoin being the first experimental implementation. Hence, it has attracted investors who seek alternative investments.

Second, many people have started to revisit e-commerce, but with a new wave of technology (blockchain). This is very much similar to the dot com boom in the late 1990s, when people started to explore new business ideas, processes, and innovations because of the proliferation of the Internet. Back then, the key word was “disintermediation.” Today, a similar trend is happening except that the underlying technology is blockchain and the key word becomes “decentralization.” Many new collaborative platforms and ideas have emerged, and with them come many supporting cryptocurrencies.

The greatest hurdles of cryptocurrency development are speculation and regulation. Just like the dot com boom (and bust), a lot of capital has been invested in cryptocurrencies. Some cryptocurrencies appreciate dramatically when their founders have not provided proofs that they generate real economic value. We can also design cryptocurrencies to support anonymous transactions. This makes cryptocurrencies an ideal instrument for money laundering and computer crimes such as cyber extortion. Obviously, the governments are concerned about the stability of the investment market and criminal activities. Hence, more regulation is expected, which could impede the development of well-intended cryptocurrencies.

Can blockchain, the technology underlying Bitcoin, serve other purposes? What are potential applications? How should it be regulated?

Blockchain is much more than Bitcoin or cryptocurrencies. It represents a new way of recording information and processing transactions. The data recorded in a blockchain are tamper-proof and traceable. The block creation process involves distributed processing in a trust-less environment. Hence, it can be used to support any collaborative transactions requiring high availability and integrity. Take financial services as one example. Many banks today perform know-your-customer (KYC) checks individually, which creates many redundant operations when the same customer opens multiple accounts in different banks. KYC implementation using blockchain can eliminate most of these redundant operations. We can share the same customer’s data in a blockchain maintained by a banking consortium without worrying about any participating bank modifying the customer data for its own interest. We can envision the benefits in other applications such as identity management, product certification, supply-chain coordination, and general tracking and goods exchanges.

Blockchain also facilitates novel applications. Take 300cubits.tech as an example. The founders (who are both HKUST alumni) see that no-show and overbooking have caused a great deal of inefficiency in the container shipping industry. They propose to use a blockchain-based cryptocurrency called TEU as a booking deposit. This could help reduce transaction costs, which has been the key factor preventing the industry from using conventional bank solutions. Their venture would not have been feasible without an enforceable digital contract backed by a blockchain solution.

Blockchain is essentially a distributed database technology, and so in itself it needs little regulation. Its applications in digital currencies, financial services, and fund raising may invite regulation, but there the focus should be on the applications instead of the technology. If a cryptocurrency carries equity nature, then it should be subject to securities regulation. If a blockchain solution is used to support gambling, then it should be regulated by gambling laws.

What is most intriguing is ICO, which many governments are concerned about now. It is inevitable that some ICOs are over-heated and the investors may not be aware of the risks when investing in these cryptocurrencies. However, by nature ICO is like the “Kickstarter for service,” where people contribute funds to support the development of a new idea and service. Many crowd-funding projects fail and the contributors lost all their investments. The same could happen to ICOs. The only difference is the scale – in crowd funding projects, the loss is perhaps up to a million dollars. In an ICO, it could be hundred millions. But still, this comparison with crowd funding raises the question – why should we target ICO but not crowd funding projects?

At the end of the day, investors should be aware of the nature of blockchain and its strengths and weaknesses before jumping on its associated products such as cryptocurrencies. Regulation can remind people about the nature of the products that they are developing/investing, but I feel that education is more important in aligning the technology with the applications.