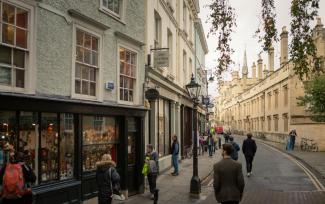 Given the hand-wringing amongst supermarket retail leaders around the world at the initial announcement in December 2016 of Amazon’s latest foray into retailing, we would have been forgiven for thinking that the Apocalypse was near. Share prices plummeted and commentators predicted an existential crisis in the sector. Amazon Go, the firm’s high tech, self-service store was due to open to the public in the spring of 2017. The store in fact opened its doors in January 2018, a little later than expected. A year after the announcement, is the store still the threat to grocery retailing as we know it? Or is something more positive and creative underway?

Work at the Oxford Institute of Retail Management on the nature and impact of retail innovation suggests the latter. The initial Amazon announcement proved to be a rising tide that has the potential to lift all boats. A sensor-rich store without checkouts that tracks multiple consumers is at the heart of the Amazon Go concept and it has attracted a great deal of attention. Of equal interest, however, ought to be the stimulus this has provided to many retailers in the grocery sector to more seriously explore the potential of new technology, as well as new customer-facing business processes, to deliver a more effective and valued customer experience. For example, Walmart is known to be trialling a cashier-free store concept, aimed at the high net worth urban consumer, called Project Kepler and is presently on the lookout for a “computer vision engineer.”

US grocer Kroger has introduced a “Scan, Bag, Go” service to omit the checkout altogether and will roll it out to 400 of its 2,700 stores during 2018. Of course, European shoppers have benefited from checkout free service for some time: for example, French retailer Monoprix has offered its “Livraison à Domicile Plus” service to store-based shoppers for over ten years (a point it made tellingly in an advert spoofing the Amazon Go promotion).

So, is it all good news? Not necessarily. In practice, not all boats will be lifted by the Amazon tide. Some are already holed below the new waterline because of a reluctance or inability to innovate or invest: we have to hope that their captains have noticed the rising waters.