Family firms are common across Asia; many of the region’s largest organizations are family owned. In a series from HKUST Business School and its Tanoto Center for Asian Family Business and Entrepreneurship Studies, faculty analyze the advantages of the structure and the challenges facing family businesses today, and they discuss what other family businesses across the world can learn from successes in Asia. 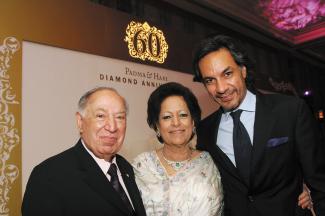 In 2008, the then head of Harilela Enterprises, Dr Hari Harilela, was in his 80s and pondering how to ensure a smooth succession that would eventually place Aron, his only son, at the head of the business and the family.

Hari knew that in this role, his relatively young son would have to deal with senior family and board members while driving the business agenda forward smoothly. However, Hari also felt he was leaving Aron a good platform from which to achieve his vision ‑-  an excellent asset base that was only slightly leveraged, the esteemed reputation of the Harilela name, a strong personal education, and ten years of hands-on experience in the business.

The roots of the Harilela Group date back to 1922, when Hari’s father, Naroomal Mirchandani (he later changed his name to Harilela), left his hometown of Hyderabad, in what is now Pakistan, for China. In Canton (today’s Guangzhou) he opened a small business trading in antiques, jade, amber, embroidery and other curios. In 1934, he moved his business to Hong Kong and, to make ends meet, Naroomal and his two oldest sons, George and Hari, sold personal essentials, such as soap, outside the British army barracks. Subsequent attempts to successfully establish shops were curtailed by the World War II and the Japanese occupation.

The family then diversified into real estate, purchasing their first hotel property, the Imperial Hotel, in 1960. In 1965, they bought the site for what is today the Holiday Inn Golden Mile on Nathan Road. Though its opening was delayed until 1975, rising property prices in the 1970s and 1980s ensured it was a commercial success. By 2008, the Harilela portfolio included hotels across Southeast Asia, and in Canada, the UK, and Australia. The Group was also beginning to invest in hotels in mainland China for the first time.

While more than 90% of the family’s wealth was in hotels and real estate, various branches of the family had also invested in other businesses, including event merchandising, travel agencies, import-export trading, restaurants, and banking and securities.

The Harilela Group was owned collectively by the family and was structured in a unique way. The six brothers made up the group’s board, with Hari as chairman. Any brother wishing to resign his position could nominate a family member as his replacement, with the board size never exceeding six. An informal handcuff agreement prohibited the sale of shares to anyone not a member of the Harilela family.

However, while each of the brothers had a seat on the board, they did not hold equal interests in the Group. Hari controlled 56% of shares in the flagship Harilela Hotels Ltd., with the other brothers holding differing ratios. Despite this, each brother had the same voting power on the board. Directors’ fees and salaries were age-related, and investment funds were drawn from each of the brothers proportionate to their ownership, with profits distributed in the same way. Hari, however, had voluntarily redistributed some of his shares to other brothers. This, and other decisions, were made with an eye to preserving family harmony.

Another unwritten tradition was that board seats were passed on to the wives of deceased brothers. They then decided to whom, within their branch of the family, the directorship should pass - or they could take up the position themselves.

Though the women in the family owned shares, a majority of them had chosen not to participate in the family business. Some younger members, however, were beginning to take a keener interest.

The mansion that kept the family together

At a time when a collective family residence already seemed an outmoded concept, four generations of the Harilela clan, 70 relatives in total, still lived together in a 100,000-sq ft. mansion in Kowloon Tong. The original mansion was built as a result of a promise Hari made to his mother. “As we were together in poverty, we should not separate in wealth," he said.

Aron, who was almost 40 in 2008, had been educated in the UK from the age of 13 up to the completion of his doctorate. Hari felt an overseas education had helped make his son independent and self-disciplined, and given him an analytical approach. His Indian heritage, with its customs, philosophy, respect for others and tolerance, had been passed down to him by his mother, Padma.

From the age of 18, Aron had used his free time to work in room service, the kitchen, restaurants and housekeeping. When he returned permanently to Hong Kong on the completion of his studies, he first received special training in the head office, before being made an Executive Director, reporting directly to the board. One of his key responsibilities in this role was to oversee the group’s expansion. In 1997, Aron led the purchase of a major London property, which became the Sheraton Belgravia. This acquisition was a significant commercial success, and by 2008 Aron was spearheading the Group’s China business.

With his father a strong believer in staying ahead of market trends, in 2008 Aron was not only defining a diversification plan for China, but also eyeing the Indian market. Aron’s growth strategy had two components: to expand the core hospitality business into new geographical markets, and to keep an open mind about diversification into unrelated areas. He felt the leadership team of a privately-controlled group could be opportunistic and flexible.

With plans in place to build ten 3-star hotels in secondary cities in China within the next five to 10 years, Aron was also working on a similar strategy for India and eyeing investment possibilities in Thailand.

Aron’s diversification strategy was sparked by the entry of private equity firms and specialized real estate investment funds into the property market. This had dramatically raised prices, and virtually converted property into a financial product, with the emphasis on quick returns in the short term. Not only was this approach at odds with the group’s long-term focus, with its lower capital base, the Group was also at a disadvantage when competing with cash-rich financial investors. Aron was therefore consider moving up the value chain and venturing into the management of hotels, and, possibly, into residential property.

Like his father, Aron preferred internally-generated funds, as opposed to debt, as the engine for growth. Some of Hari’s other brothers, however, acknowledged that lack of access to capital markets could now constrain the Group’s growth. Again, Aron’s view was pragmatic. He foresaw the Group probably remaining private, but wasn’t averse to floating companies formed for specialized segments ‑ investments in China being an example.

In certain matters such as punctuality, punctiliousness, and strategic thinking, Aron admitted to benefiting from exposure to western ideas and education. On the other hand, qualities such as active listening, and the philosophy of right versus wrong leading to karma, had come to him through his family.

The Group’s philosophy had been to hire staff who demonstrated a high degree of personal integrity and sincerity, and who were willing to serve long term. Its management style was benevolent paternalism, with a helping hand offered to staff in times of need.

Aron acknowledged that, probably in the distant future, the group could consider hiring an outside CEO - though a more modern governance structure would need to be in place first. Similarly, working with joint venture partners on projects where the Group’s experience was limited was another possibility.

These sorts of moves raised the question of rewarding external hires without diluting the family’s financial control of the business - especially as it was thought that informal lock-in arrangements might not be effective or sustainable in the long run.

Hari believed tolerance was key to keeping the family and the business together. So, while the brothers had their disagreements, they always worked their way through them together.

In 2008, Aron’s view was that a more formal structure with a greater division of labor and a hierarchical structure was required to keep the family working together harmoniously. In addition, at this time the brothers on the board were considering introducing a formal “non-compete” clause to ensure that future growth and family harmony were not impaired by family members managing competing businesses. And, with independent directors already on the boards of some group subsidiaries, a decision over whether or not they could hold other positions, including chairmanships, was being weighed up.

Aron saw his relative youthfulness as an asset not a problem, as it would allow him to act as the bridge between the older and younger generations, and help draw the family’s bright youngsters into the business. However, as members of the younger generation increasingly studied and worked all around the world, and therefore grew up separately, keeping the family together, with a shared vision and purpose, was becoming much more difficult.