Bridging The Divide: What Makes for Successful Public-Private Partnerships 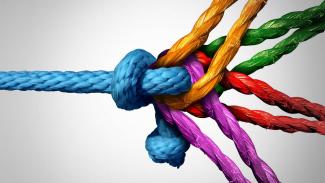 Public and private organizations often partner, collaborating to create value for all sides. “There is no reason to think that public and private bodies would share similar objectives,” explains Bertrand Quélin. “A public body’s main aim will be to create social value, whereas a private company’s aim is normally economic sustainability and profit. However, when they understand each other well, they can work together and create both social and economic value.” To understand how companies and organizations do this, Quélin and co-authors looked at the dimensions of each organization and how they hybridize when they form a partnership. They then identified the mechanisms that result in added social and economic value.

Two forms of hybridity often present in a partnership

Initially, Quélin needed to highlight and separate the two distinct dimensions of inter-organizational hybridity. “There is hybridity in governance, and hybridity in organizational logics,” he explains. “Hybridity in governance describes how organizations set-up their collaborations and partnerships. Hybridity in logics looks at the different, and potentially divergent, institutional patterns that influence the actions of an organization.” To illustrate, Quélin shares an example wherein both forms of hybridity create a successful, value-adding partnership: “Water is often provided by a private company that gives you water on tap in your home. The primary form of governance in this scenario is the public municipality with which the private company has signed a long-term contract. Through this, the private company is obliged to supply water to a certain number of homes and may be required to ensure that poorer people also receive water.” He goes on to add: “The contract drawn up must consider the social responsibilities of the public body and allow the private company to profit, and thus will exhibit hybridity in governance.” He explains that this has been seen in Tangiers in Morocco, where the municipality has joined forces with a French company. In this case, hybridity in logics is also observed: “A large portion of the population cannot cover the full cost of water, so the public-private partnership took action to ensure water is available to all.”

The team narrowed the key mechanisms down to three. Quélin explains, “Firstly, there are contractual factors. Public and private partners need to discuss the obligations of both sides – and this takes time. Here, they may discuss the potential for public monitoring to supervise private activity and add clauses to the contract that allow for penalties if the private company does not deliver. Then, there are institutional factors. Institutional environments can be created that make it easy for organizations to enter into partnerships. In some countries, laws have been set up to facilitate this, and some even have specific public-private partnership units set up to educate the market and make it more likely that partnerships will be successful. Finally it comes down to capabilities. There are large international private firms that build, make drugs, offer utilities, and so on. They have the capabilities to regularly partner with government municipalities. The public sector also needs to have the capability to supervise and monitor the private companies and ensure they meet contract specifications.”

Quélin concludes by discussing the Bill and Melinda Gates foundation: “The foundation delivers drugs to low income countries, mainly in Africa. It needs a good relationship with the government dictating health policy, with the pharmaceutical firms supplying the drugs, and with the NGOs who are on the ground distributing them. It is a very rich organization, which enables it to have large contracts with the drug companies – it pools purchasing and acts as a strong purchasing power. Through this, it can achieve its aim: to reduce the rates of damaging diseases for public benefit. The foundation is a good example of how the mix of hybridity in governance and hybridity in logics creates social and economic value.”

Based on an interview with Bertrand V. Quélin about his paper “Public-Private Collaboration, Hybridity and Social Value: Towards New Theoretical Perspectives,” co-authored with Ilze Kivleniece and Sergio Lazzarini (Journal of Management Studies,  2017).