The Active Role of Universities in Poverty Reduction

In the fight against poverty, it is not enough to focus on the poor; it is also necessary to include the non-poor. The social incubation model by Mexican students in the University Social Service program helps to reduce patterns of exclusion and margination that perpetuate the cycle of poverty. 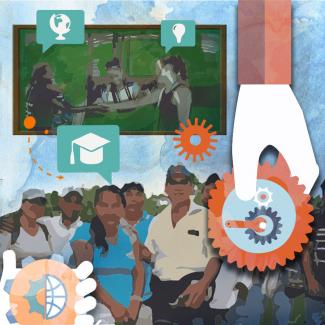 Even though poverty has decreased in a decade from 43.9% to 27.9% (2013) in Latin America and the Caribbean, it remains the most-unequal region on earth. The region is home to 14 of the world’s 150 wealthiest people, while some 82 million people survive on less than $2.25 dollars a day, and another 124 million are at risk of falling into poverty.

While several programs have been put into place to reduce poverty and fight against margination and social exclusion in the region, for example, by educating the poor, little has been said about the role of the non-poor in fighting against or perpetuating poverty and inequality.

For those who are not poor, poverty is often a distant phenomenon for which they feel no responsibility, blaming those who suffer it. This social dehumanization exacerbates the patterns of exclusion and segregation that reproduce and generate poverty, hindering the development of poverty-eradication strategies. What if, instead of focusing our efforts only on educating the poor, we educated the non-poor, making them aware of the human and social consequences of poverty? Perhaps the answer is a dual educational process, which would not only increase the capabilities of the poor but also those of the non-poor, to create integration strategies that help to mitigate poverty.

This was the hypothesis of the research I performed together with Dr. Luis Portales, from the University of Monterrey, published in the article “The impact of university social services through social incubation and student engagement in poverty alleviation” as part of the United Nations project Principles for Responsible Management Education.

We look at Social Service in Mexican universities. After the Mexican revolution, under the guise of reciprocity and solidarity between universities and low-income sectors, the state established the Social Service, through which university students give something back to society for the education they are receiving—meaning that they perform 480 hours of service to the community or an organization before they can graduate. Because it is a decentralized program, each university regulates and organizes it as it sees fit; some private universities have geared Social Service toward learning competencies for social development and civic commitment, including management knowhow and practices and tools to fight poverty and economic exclusion in vulnerable communities.

In our research, we identify three poverty-reducing educational models used at nine private universities. The information was gathered from interviews with students, professors, and administration staff, as well as from fieldwork.

The primary difference between the three models is the students’ degree of autonomy and participation. While in the first model there is little involvement, in the second, implementation is limited. The third model strengthens empathy and generates supportive links between the entrepreneur and the student, who share the same goal. By appropriating the problems and applying solutions, students see themselves as agents of change for the poor, while the entrepreneurs receive training and advice that increase the impact on personal and business conditions.

Social incubation shows how knowledge transfer between students and entrepreneurs contributes to improving living conditions, especially for women. Still, the greatest challenge is to consolidate these business models based on shared value creation and to build more-inclusive economies.

Under this perspective, the university Social Service contributes to some of the United Nations Sustainable Development Goals such as fighting poverty and promoting justice and awareness by building associations between different actors in the society. These experiences with the Mexican Social Service program foster the creation of alternative models in universities to fight poverty and the dehumanization that goes along with it.