Competitors and Companions: KFC and McDonald’s in China 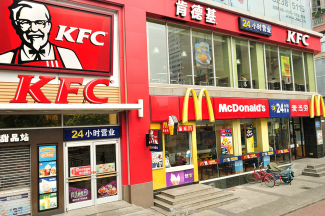 Conventional wisdom says that the entry of a competitor hurts sales and profit, especially when both are operating close by and targeting similar customers. Thus, some companies set up shop far away from competitors to enjoy a larger market share.

In China’s huge and rapidly growing fast food industry, although KFC and McDonald’s are direct competitors, they have also benefited from each other’s presence.

My research colleague and I studied the entry and expansion history of KFC and McDonald’s over 30 years in China, collecting data including the number of new outlets opened each year in each city and the local economic factors of the cities entered.

We found that a rival’s presence drives a chain to expand but, in the case of McDonald’s and KFC, for very different reasons.

When KFC opened its first outlet in Beijing in 1987, it introduced what was then a novel Western concept to the Chinese – fast food. Now, with more than 5,000 outlets in over 1,100 Chinese cities, it dominates the Chinese fast food market.

We observed that KFC typically enters the capital city of a province first and then expands to nearby cities. KFC chose China’s capital city Beijing as the home of its first outlet and quickly spread to the east and south coast, which is economically more developed than the rest of China. Then it steadily expanded to the north, the central area, and the west.

In contrast, McDonald’s expansion has been more conservative. It opened its first outlet in 1990 in Shenzhen, the special economic zone bordering Hong Kong where the firm then had its regional headquarters.

In its initial years, it limited its entry to cities in the southeastern part of China close to Shenzhen and a few other major cities elsewhere in the country. It accelerated its expansion from 1999 but was dwarfed by KFC’s even faster pace. More often than not, KFC has the first-mover advantage. Currently, McDonald’s has about 2,200 outlets, less than half of KFC.

We found that both KFC and McDonald’s are more likely to increase the number of outlets in a city where their rival has a larger presence. A rival’s presence appears to motivate them to expand there.

Why? There are two potential reasons – market learning and demand expansion.

Results from a series of complex modeling analyses we ran showed that KFC and McDonald’s expanded into a rival’s territory for different reasons. The presence of KFC signals market potential and growth for McDonald’s to enter, whereas the prior presence of McDonald’s helps to cultivate tastes to prepare the market for foreign fast food, benefitting KFC when it enters subsequently.

How so? KFC, it seems, may have a better understanding of local Chinese consumers.

For example, the founding leadership team of KFC’s Great China division is made up of ethnic Chinese born in Taiwan – people who have a better knowledge of Chinese culture and the market than the leader team in McDonald’s, made up of non-locals.

These insights serve KFC to know better which market has innately more potential with growing demand for fast food. KFC’s presence serves a cue to McDonald’s that due diligence on market potential has been conducted. Hence, McDonald’s learns from KFC that the market is worth entering.

Further evidence of market learning comes from the pattern of McDonald’s expansion. If a chain is learning about the local market and its potential from its rival, then it is more likely to expand into markets where the rival registers higher sales revenue since it signals that the rival understands the market.

We found indications of this for McDonald’s but not for KFC.

In contrast, why would KFC not enter a market first? Probably because such markets do not yield as much potential as those it chose to enter – perhaps the market is not familiar or ready for Western fast food. However, should McDonald’s enter such markets prior to KFC, it helps to build demand which KFC will eventually find lucrative to enter.

Our research sheds light that competing firms can learn and benefit from each other in their expansion into a foreign market although the type of learning and benefit varies by firm.

For some brands, they may compete close to their rivals because they rely on rival’s due diligence that the market is profitable; for others they see their rivals as having smoothed the way for them. Regardless, competing close to rivals can bring out the best of a brand in addition to giving customers choice.

But what if the market is reaching saturation? If that is the case, it is more likely to see the competition effect dominating the positive spillover effects of rivalry. Hence, a firm may be more likely to stay away from its rivals.