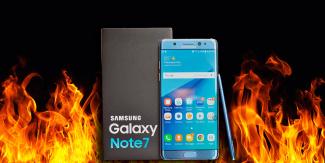 The short-lived Samsung Galaxy Note 7 was a great product, with one great problem: an unpredictable tendency for its lithium battery to burst into flames.

Fortunately, more by luck than design, there have been no reports of serious injuries. Indeed the biggest victim of the Note 7 debacle is Samsung itself. Its mishandling of the crisis has battered the tech giant's reputation, wiping billions of dollars off its share price and brand value.

It also killed off a flagship phone that could have given rival Apple a run for its money.

I've been following the growth of Samsung for the past 20 years. Here are seven lessons Samsung and other firms can take from this saga:

The feature-rich Note 7 should have set a new benchmark in the highly-competitive smartphone business. Some reviewers even labelled it "the best phone ever made".

Buoyed by speculation that Apple's upcoming iPhone 7 would be a relatively modest and uninspiring upgrade, Samsung seems to have become overly focused on beating their rival to market. Samsung's designers worked to pack the phone with the most up-to-date technology and features.

While they maintained the size of the Note 7's screen, they shrunk the overall size of the phone and promised a long lasting battery. The newsoftware demanded more power but left less physical room for the battery itself, posing a huge challenge for Samsung's engineers.

2. Speed comes at a price

The race to beat Apple suited Samsung's corporate culture well. In 20 years, Samsung has transformed itself from a low-end components maker into a premium technology brand. It has achieved this through a deeply entrenched top-down structure that demands speed and execution.

Since the iPhone 7's launch date was set in September, Samsung gave itself an impossible deadline that engineers would have worked around the clock to meet. Moreover, such an adrenaline-driven approach to product development can downplay the boring but very necessary stage of testing.

Speed may be important. But what matters most is reliability: Apple's iPhone 7 - boring or not – is safe and actually works.

3. Listen to the silent voices

Samsung's position in the premium mobile market has been founded on its ability to keep churning out new and more powerful devices. It has been highly successful at doing so, yet this may also have bred an over-confidence in senior management about the firm's capabilities.

Lower down, some employees must have sensed problems with the Note 7, however none felt able to speak loudly enough, raise questions or risk delaying the launch.

Operating at the cutting edge of technology can bring high rewards, but when problems arise it's important to acknowledge that those at the frontlines are often the best at spotting it.

Samsung was a no-name brand twenty years ago and has worked hard to build its brand. The company doesn't just produce smartphones nor was the Note 7 its only phone.

Yet in a connected, social media-driven world that thrives on bad news, its poor handling of the Note 7 saga has become a black mark against the Samsung name. The risk is that this undermines key intangibles like customer loyalty, prestige, desirability and positive brand recognition.

This is especially serious for a company that positions itself as the sole competitor in the premium end of the smartphone market able to take on Apple, a company widely-regarded as having the most valuable brand in the world.

5. Make sure you fix it right the first time

For an organisation that prides itself on rapid action and execution, Samsung was relatively quick to find a fix when problems first emerged with the Note 7.

But the fix was not really a fix, as became apparent when reports emerged of replacement phones bursting into flames.

Fixing a problem with a solution that works shows you know what the problem was and know how to solve it. In cases like this, customers can be surprisingly forgiving. Instead it became apparent to many that Samsung had no idea what the fundamental problem was – a bad place to be for a tech firm.

6. Strike the right note with customers and stakeholders

Samsung may have acted quickly in some senses, but its communications were widely criticised for appearing guarded and slow.

The first rule of crisis management is to communicate openly and transparently. This is even more important in the tech world, where bad news becomes viral very quickly.

But like many large companies Samsung has a tendency towards undue secrecy and aloofness. For example, the first Note 7 recall in the US was launched without required coordination with the Consumer Product Safety Commission.

Likewise the recall was initially branded an "exchange programme" – attempting to put a clunky public relations spin on what, in many consumers' eyes, was the sale of a potentially dangerous product. That went from bad to worse when it became apparent the replacement phones hadn't fixed the problem.

7. Culture must adapt to complexity

Competing in the premium smartphone market means constantly pushing the boundaries of technology. Samsung needs to be innovative, nimble and creative – this requires strong management but also creativity and initiative from low-level employees.

In a giant company like Samsung this does not sit easily with a culture that historically has followed a top down approach to organisation and direction. Indeed, it can actually lead to damaging conflict.

Balancing speed and execution with creativity and initiative is a trade-off and in the fast-changing tech sector getting this balance right is what matters.

The Note 7 story shows what can happen when it goes wrong.