Adopt, Adapt or Lose: The Impact of New Technologies on the Financial Services Industry 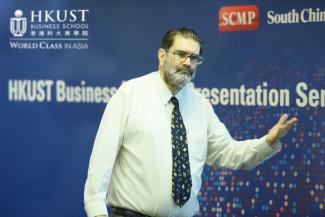 The financial services industry has been pretty successful at absorbing technological innovations into its daily operations, from credit cards to ATMs to online banking. But that success should not be taken for granted, warned Professor Theodore Clark of the Department of Information Systems, Business Statistics and Operations Management at a Business Insights luncheon talk.

Disruptions are still underway and banks and other financial services providers need to remain alert to the changes and challenges on the horizon, he said.

“When we look at the challenges that traditional financial services companies are facing, we see various kinds of e-payment like mobile phone payments, PayPal and others, resulting in non-traditional financial services transactions outside of traditional banking. We see peer-lending, both to consumers and businesses, through the cloud or crowd-funding. And we see digital currencies like bitcoin. Bitcoin has got a lot of attention, maybe it’s a big deal, maybe it’s not, but some of the largest banks are investing in it.

“So there is a lot of competitive pressure on traditional services, some from just increased competition and some from technologically-enabled process innovations that are changing the industry,” he said.

Those new technologies are examples of what Clayton Christensen of Harvard University has dubbed “disruptive innovations” because they have the potential to reduce costs, increase efficiency and change industry structure, he said.

All that might seem unsettling for an industry that must deliver security and reliability to customers, but Professor Clark also cited examples where financial services had responded well to the challenges. The credit card industry, proliferation of ATMs, global banking services and online banking all resulted from disruptive innovation.

Two high-profile cases involved Security First Network Bank and Capital One. Security First pioneered online banking in the 1990s when traditional banks were avoiding it. Within one year of launching, it had customers in all 50 states in the US despite having no branches, and its success with online banking inspired all major banks to similarly offer online options within three years.

Capital One started as a small regional bank, but then it agreed to try out data mining to see if it could identify customers who were the least likely to default on their credit cards and offer them lower fees. This took market share away from the bigger players and Capital One grew rapidly. Although it went on to evolve into a larger traditional bank, its approach towards data mining (also known as big data) caught on and other banks soon followed suit.

“What does all this mean? Traditional banks have to adopt, adapt or lose markets. If you don’t adopt new technologies or adapt to the impact of new technologies and new business processes, you will lose markets. If you ignore a new market or technology, this could lead to a shift over time that might start out small but becomes an alternative credit card processing business, an alternative to traditional banks,” he said.

Banks face looming challenges because innovations and activities are moving out of the purview of the traditional banking environment and into other industries. But that is not to say customers want to give up on traditional banks, Professor Clark said.

“The good news is customers prefer companies they can trust, brands they know, large players. They’re first option is to go to HSBC or Standard Chartered and say, what can you offer me. And if you have nothing to offer that they like, then they will look at somebody else who has a better deal or service, more convenience or can do it cheaper. But the first inclination for a loan or processing is to turn to what they know and trust.

“For the financial services industries, that’s an opportunity to be leveraged. You don’t have to be the first mover. If you’re a traditional bank, you just have to be good enough. You can’t lag years behind or you’ll lose the market, but you can lag a little behind and many do. Just be able to move fairly quickly,” he said, adding: “Also keep a lookout for players outside the industry like the cell phone business, where there is opportunity for interesting partnerships. A Capital One executive has called the cell phone a credit card with an antenna.”