Better a Brexit for a Revitalized EU 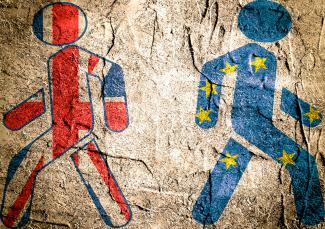 Let me begin by saying I am a great Britophile. I lived in the UK for some fifteen happy years; I met my wife (even though French like myself) at Oxford where I did my doctorate; my three children were born in the UK; I love British humor; I have in many ways considerable affection and admiration for the country. But I believe Britain should exit the EU. It will, in any case, not be that difficult (psychologically) to exit, as Britain never really entered. Whether it will be good for the UK I do not know, but it is important for the future of the EU.

I was living in the UK (in Scotland, actually) when Britain joined the EC (European Community, as it was then called) in 1973 under the prime-ministership of Edward Heath; I was still there in 1975 when Britain’s first ever referendum was held under prime minister Harold Wilson to determine whether to stay. The “yes” vote was, I admit, quite overwhelming: 67.23% on a 65% voter turnout, which is very high. If there are comparable stratospheric Remain outcomes at the 23 June referendum, I shall revise what I say here. My current assumption is that one way or another it will be by a whisker.

The UK joined the EC mainly because the alternative trans-European organization of which it had been a founding member in 1960, EFTA (European Free Trade Association), along with Austria, Denmark, Norway, Portugal, Sweden and Switzerland, was failing to pick up momentum. EFTA was not the direction in which the policy winds were blowing. Denmark abandoned EFTA for the EC the same year as Britain, as did eventually Austria, Portugal and Sweden. (Iceland, Norway, Liechtenstein and Switzerland remain.)

Britain made a calculated and rational choice based on what it believed was its economic interests. But whereas EFTA was quite overtly a purely economic entity, the European Community/Union is supposed to be more than that … and unless it succeeds in becoming more than that it will fail. While the debate contained a good deal of very pragmatic discussion on potential material gains and losses, with very few exceptions, there was no emotional commitment. It was very much what the EC can bring to Britain and very little what Britain can bring to the EC.

British emotions and loyalties were more directed at alternative partnerships. There was the “special relationship” with the US: as conveyed in the meeting of the aging statesman Harold MacMillan and the youthful president Jack Kennedy, that Britain would be the “wise Greece” to the vigorous “American Rome.” In 2003, the special relationship led prime minister Tony Blair to abandon the UK’s major European partners, Germany and France, in their opposition to the invasion of Iraq, in favor of playing poodle to president George Bush by joining in the invasion. This act, apart from its cataclysmic impact on the Middle East, threw to the dustbin any prospect of a Common European Foreign and Security Policy. The other major alternative partnership was the Commonwealth. At the time of the 1975 referendum then prime minister Harald Wilson admitted he was far more emotionally attached to the Commonwealth than to the EC. Britain, thus, was challenged by divided loyalties, which was not the case with the other EC/EU members.

Once having officially “joined,” the UK has been the perpetual Euro-whiner, moper and groaner. It has sought to put a brake on any attempt to deepen the union politically. It has opted out of all sorts of European initiatives, including the Euro, which may be fair enough given the global role of London and the pound sterling, but it also chose, along with Bulgaria, Croatia, Cyprus and Romania, not to be part of the Schengen visa-free zone. Britain has Europhobes and Eurosceptics, but even among the “pro-EU” segments, with some exceptions, they are mostly at best Euro-recalcitrants. Thus while there are also anti-EU political groupings in the other EU countries, they are not from the mainstream parties, but invariably populist extremist fringes, as in the Front National in France or the Alternative für Deutschland in Germany. Nor can one imagine a former mayor of Berlin or of Paris vociferously advocating their countries’ exit from the EU, as is the case with former Tory Lory Mayor of London Boris Johnson.

So long as the EU includes the UK, political progress will be impossible. Political progress is desperately needed. The EU may not be a sinking ship yet, but it is badly adrift in extremely and increasingly choppy waters. No less an authoritative figure than former German foreign minister Joschka Fischer has sounded the alarm – including in his recent book, Is Europe Failing? – that since 2008 Europe has been unravelling.

It is important to remember the striking contrasts between Europe in the first half/three quarters of the twentieth century, with all the wars, civil wars, revolutions, extremist ideologies, racism, leading to the Holocaust, and the progress, peace and prosperity of Europe of the second half/last quarter of the 20th century. This cannot be entirely attributed to the founding of the European Union, but undoubtedly it played a crucial role.

At the dawn of the new century, it seemed this trend would continue. Things have turned out very dramatically differently. Though Europe has not yet descended to the depths it witnessed in the past, as Timothy Garton Ash, Professor of European Studies at Oxford University,  (“Brexit would compound all other European crises”, FT 10 June) wrote, “there is an ever-present possibility of Europe relapsing into barbarism”. Whereas Garton Ash and I agree with the diagnostic of Europe today, we disagree on the prescription: his view is Brexit makes the relapse more likely, my view is that Brexit may be a sine qua non for the EU’s revitalization.

How the EU got to the state it is in cannot be described in detail here. Suffice it to say that in the face of its multiple and, indeed, quite daunting challenges, the European “Union” stands disunited. There is no solidarity, no soul, no vision, only incessant petty squabbling among member states, while within member states populism, xenophobia and racism are increasingly raising their barbarous heads.

To be clear. The fault for the unravelling of the EU lies not with the Eurosceptics, or even the Europhobes, but with the Eurocrats and with the leaders of the EU and of the member states. The Brussels bubble has alienated European citizens, especially the next generations. There is an urgent imperative to take Europe away from the clutches of the Eurocrats and bring it closer to European citizens. There are many ways that can be done. To cite only one example, while the direct popular election of the President of Europe is not per se a cure, it will help legitimize the political integration. At this juncture of the 21st century and in light of Europe’s role and place in the world, there is no room or time for atavistic concerns over national sovereignty. Sovereignty needs to be pooled. United Europe will stand, divided it will fall.

Of course, a deeper and more integrated EU could well lead to other European member states to exit. So be it. As Alan Stoga, chairman of the Tällberg Foundation, (“Does Europe Need Brexit?” YaleGlobal, 9 June) commented, “Shedding less committed members could strengthen the European Union”, to which he added: “Perhaps the Brexit vote could become the catalyst for reinventing the EU in ways that would make its institutions more democratic, more resilient and more effective.” I agree.

As this column is written for Forbes Asia, let me add that a more united, better integrated, less ineffective EU should have beneficial consequences for Asia and should contribute to exiting from the morass in which the world finds itself at present.

This story originally ran in Forbes.