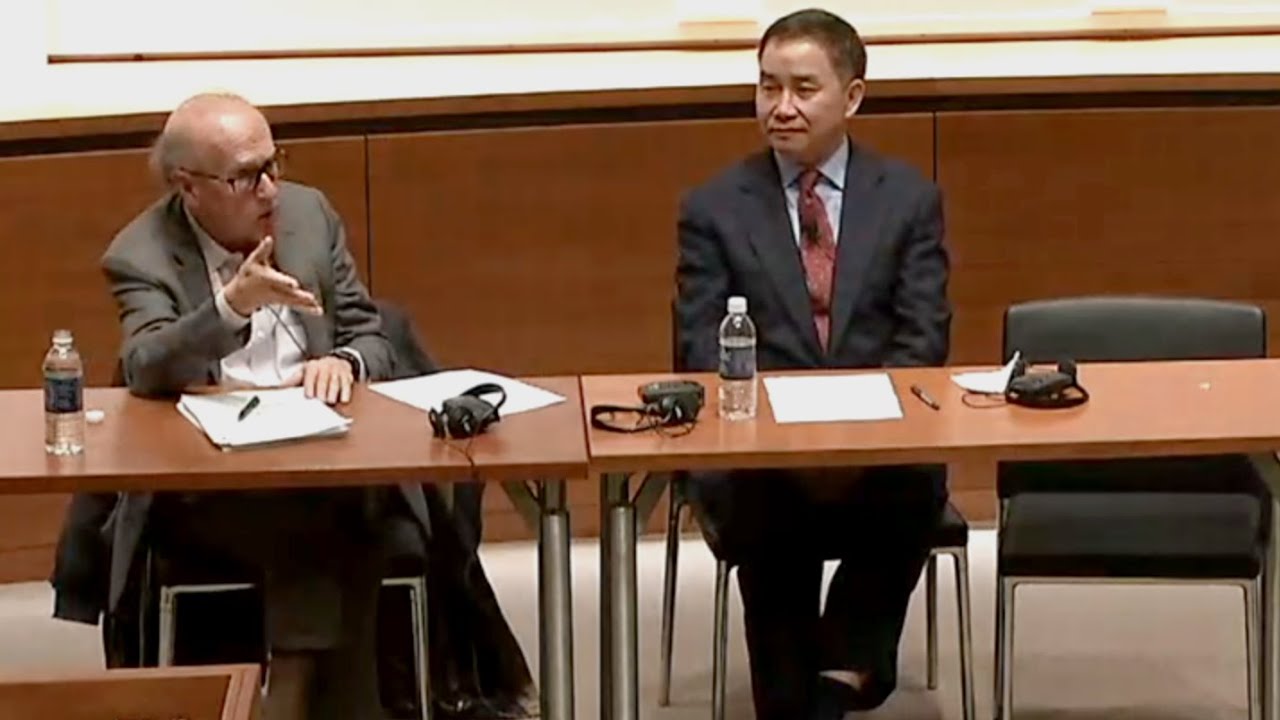 Is the Chinese economy poised for a crash or is the country just going through some economic growing pains? Professors Zhiwu Chen and Stephen Roach presented two opposing views on China’s outlook during a debate at the Yale School of Management on March 1.

Yale SOM’s Chief Executive Leadership Institute (CELI) hosted the debate between Chen, an expert on China's economy and capital markets and a native of China, and Roach, a senior fellow at Yale University’s Jackson Institute of Global Affairs who teaches a large lecture class on China and was formerly the chairman of Morgan Stanley Asia and the firm’s chief economist.

Jeffrey Sonnenfeld, senior associate dean for leadership programs and the founder and CEO of CELI, moderated the discussion, which was titled, “The China Debate: The Collision of Myths, Markets, and Economies.”

Calling himself an “optimist” on China, Roach said that global concerns over China’s liquidity crisis and accompanying fears of a “hard landing” for the Chinese economy are exaggerated.

“There are a lot of challenges, but all this talk over a crash is overblown,” Roach said.

He pointed to a host of indicators that, he said, illustrate that the Chinese economy is going through a period of transition, not headed toward a crash. A rebalancing of the real economy is largely on track, personal income is growing, and the services sector is growing, Roach said. The problem, he added, is that the income is being saved and consumer demand is being restrained, as a result.

Roach also said that China has “more than enough money” to deal with any capital flight out of the country, and that the financial markets “continue to misunderstand and oversimplify China.”

He cautioned against looking to historic precedents, such as past crises in Japan, Thailand, or the U.S., to forecast what is happening in China. “These examples are not relevant to China,” he said. “If you think China’s going to crash, just do the math.”

Roach pointed out that the service sector of China’s economy now represents 50.5% of the country’s GDP and is growing at a healthy rate. “The math does not suggest that you’re going to get a hard landing,” Roach said.

But Chen maintained that China’s financial problems are more fundamental and rooted in the political-economic setup, which allowed for imitation-and-investment driven growth in the past but has now become a drag. The new political trend is discouraging risk-taking, new initiatives, and, ultimately, growth. He said that 2015 marked a major turning point for fiscal conditions in China, and things are getting worse.

“China today is going backward, fast,” Chen said, suggesting that a “hard-landing” economic scenario in the next five years is likely.

He pointed to ominous signs, including China’s skyrocketing corporate debt, which has climbed 70% in the last seven years. “No other country in the world has run up debt like this over this short span. In order to maintain growth, China is continuing to add leverage rather than deleverage,” he said.

But Chen warned that the Chinese hard-landing won’t be a “Lehman-style financial crisis” that sees big banks failing or bank runs, because the Chinese government has effectively a “super stabilization fund” that stands ready to bail out banks and other financial institutions. “In that case, financial panic doesn’t build on itself,” Chen said. “This is very important for  understanding how China works.” Real estate bubbles and worsening fiscal conditions for the Chinese government are better indicators of “real troubles ahead” in China, Chen said.

Many of China’s problems, he said, can be attributed to a “fast-worsening ideological and political situation.” China’s anti-corruption efforts, supposedly designed to root out illegal activity and corruption, are often being used as a political weapon, Chen said.

“People are hunkered down and trying not to do big things, because doing things would draw attention to you and make you more likely a target of investigating down the road,” Chen said. “The political factor is a key, key driver of the ongoing slowdown.”

Roach countered that anti-corruption efforts are essential if China is to rebalance toward consumer-led growth. “Chinese families need to trust institutions,” he said. “You can’t do a consumer-led rebalancing with corruption deeply embedded.”

But Chen responded that even the term “anti-corruption” is misleading. The effort is not a rules-based attempt to level the playing field. “It’s half politically motivated and half for real anti-corruption,” he said. “These ‘anti-corruption’ efforts are very selective. When investigation is selective, it makes people feel insecure.”

The resulting chilling effect erodes confidence. It discourages financial investment and growth, and there has been “capital flight” out of China as a result, Chen said.

“Political reforms are necessary now more than ever, in order to provide a better sense of security for private property and individual rights,” he said. “All the economic reforms are just talk without them… As long as growth is government-driven, the risk of out-of-control bubbles and, hence, of a crisis is very high.”