What Does the Chinese Slowdown Mean for the World?

China’s slowing economy has rattled markets around the world. Yale SOM’s Stephen Roach, the former chairman of Morgan Stanley Asia, says it’s good that China is making a much-needed transition—but other countries will need to adapt to a new normal. 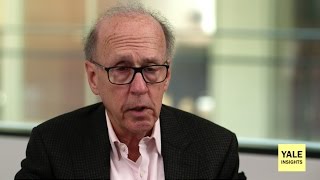 The news on January 19 wasn’t good. China reported that its GDP for 2015 was 6.9%, the lowest in 25 years. That figure prompted the International Monetary Fund to lower its global growth estimate for 2016. With U.S. stocks posting their worst 10-day start to a calendar year and no sign of a turnaround,Forbes posted an article urging readers not to panic.

While investors and businesses in the West will feel pain from the current Chinese slump, Stephen Roach says they should also see reason for optimism about what he sees as an ongoing transition from an industrial economy to one built on services and consumer spending. Roach, a senior fellow at Yale’s Jackson Insitutute for Global Affairs and the former chairman of Morgan Stanley Asia, noted that services now make up the largest part of the Chinese economy and the fastest growing. With the government focused on spurring the transition to a consumer economy, Roach says that many people in the West need to work harder to understand how China is changing. “Most observers in the West are very fixated on the China they’ve come to know and don’t appreciate what I call the next China, which is going to be a very different China,” he said.

That new China will not look much like the “World’s Factory” model of the last few decades, which means that other economies will need to get used to a new normal. For example, commodity prices are plunging; the consensus is that they will rebound when China’s economy does. But, Roach said, the slump in commodities is not just a result of the drop in China’s growth; it’s the result of a structural change. “The world’s largest source of demand for commodities is, number one, slowing its growth rate and number two, moving away from commodity-intensive growth,” he said. “Observers in the West, unprepared for this, in denial, are getting hit extremely hard.”

The U.S. economy is among those that will need to adapt to a new China. With American consumers still not spending what they were before the financial crisis, Roach said, the U.S. needs strong export growth to solidify its economic gains. That growth is unlikely to come from China. “Our third-largest and most rapidly growing export market is not going to be delivering in the future the way we’re accustomed to,” he said. “We better think long and hard about that.”