Can We Change the Climate Conversation?

Global leaders are hoping to reach a historic agreement on how to address climate change at the COP21 Summit in Paris. Such discussions have not yielded results in the past, so what’s different now? Yale'sBrad Gentry spoke to Global Network Perspectives about the state of the climate change talks and what the recent Global Network survey of MBA students tells us about the change in the discourse.

Participants at the opening of the UN Climate Change Conference in Paris (COP21) on November 30. Photo: Rick Bajornas/UN Photo/SIPA via AP Images.

When the climate change treaty was originally negotiated between the industrialized, wealthier countries and the less-industrialized, less-wealthy countries, they assigned different responsibilities to each group. The major goal of Paris is an agreement in which all countries will be part of a response to climate change. That needs to reflect the fact that countries have contributed to the problem in different ways and that countries have the capacity to help contribute to solving the problems in different ways. They still need to work through all of that.

For a long time, the climate negotiations were viewed as, “We’ll let the environmental ministers deal with that and we in the finance, foreign affairs, and energy ministries don’t need to worry about it.” Part of the reason why the Copenhagen negotiations failed—which was the last spectacular failure in this area—was because, suddenly, the finance ministers and the energy ministers started to view climate change as a huge economic and strategic issue for them. Copenhagen was based on a model that if you could have a global deal that met x criteria, you could come to a consensus and impose it from the top down.

The response to climate change has been happening more and more from the bottom up. Whether it’s country by country, city by city, or company by -company, people are excited. So that’s what makes Paris exciting—it’s a gathering where most countries in the world have said “Here’s what we’re willing to commit to” and those global commitments can be tied into an overall global commitment to take action. Many people say the countries haven’t committed to do enough. Many developing countries or less-wealthy countries say the wealthy world that caused this isn’t contributing enough. My impression is that people are pretty hopeful that nation-state traditional treaty-making will happen in a way that moves forward at least what people have committed to.

What kinds of issues does the bottom-up approach raise?

It raises all sorts of questions.

The Obama administration may choose to commit the United States to some things, but not others. What does it need approval from Congress for? It won’t get approval from the current Congress. The other issue is that now there are cities, companies, and other organizations saying, “We too will commit to reduce our emissions in various ways.” Those parallel tracks have gotten closer. Now you can see people more widely saying, “This is really important and we need to do something about it.”

That’s one of the themes I see in the Global Network survey of MBA students around the world. The results show there’s a huge amount of concern and interest in figuring out what the opportunities might be for businesses to contribute to fixing climate change. Clearly that includes businesses supporting things like putting a price on carbon or capping emissions while figuring out how they can still have their company goals succeed. That’s much harder for the coal industry than it is for the solar industry but that is the nature of the dialog now. 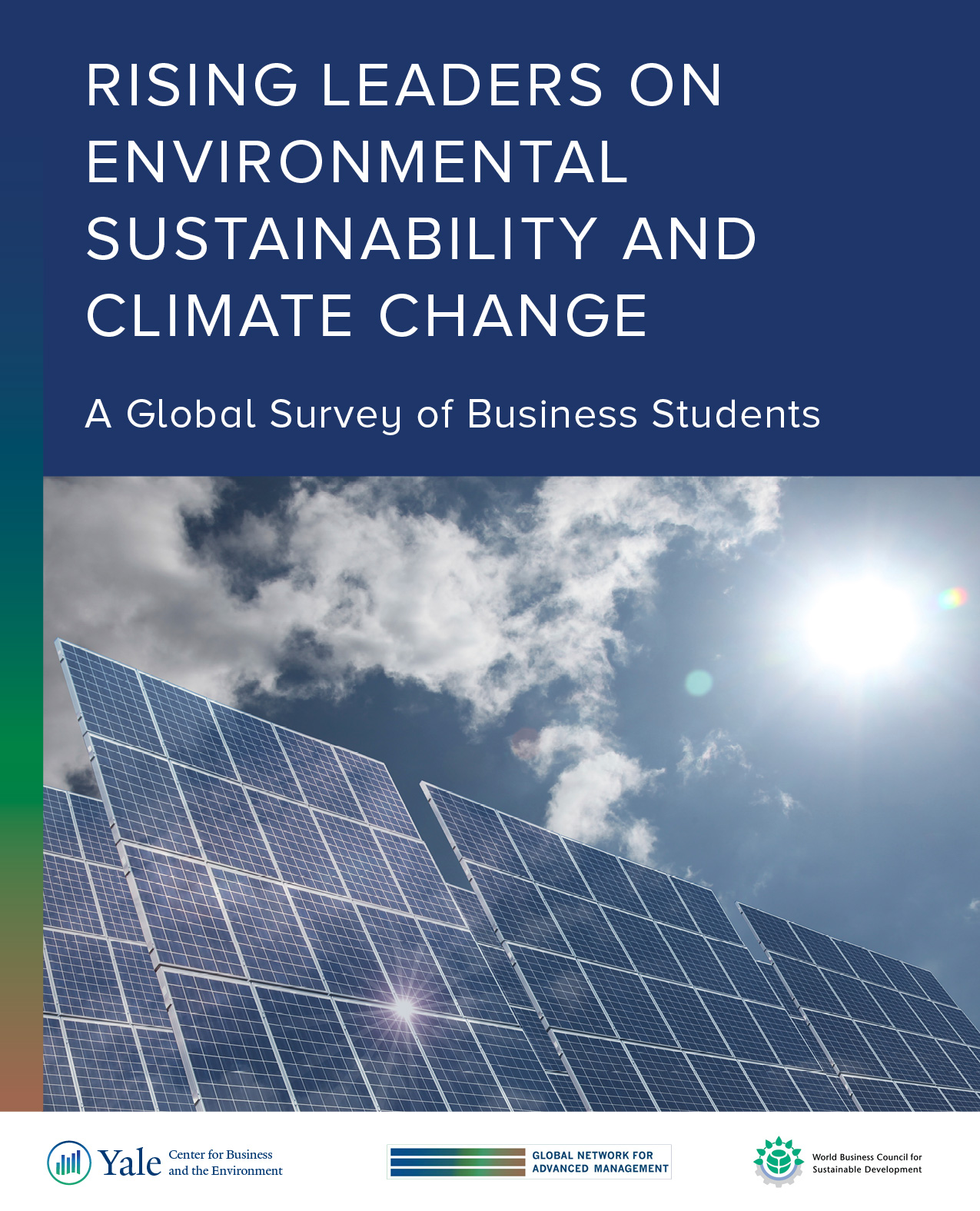 At the Center for Business and the Environment, we’re quite excited about the fertile ground for thinking about solutions and how businesses might be involved in solutions. We recognize that there are clear market distortions here: externalized costs, externalized benefits, etc. Some of those distortions require policy responses, but there’s now more business support for those policies to be put in place in different parts of the world. It’s a terrible time in some respects because there’s such a crisis, but it feels like the crisis has finally been recognized by enough people in enough organizations that there may be some response.

You mentioned involving finance and energy ministers in in the conversation. Are they more empowered now that businesses are willing to pay attention to this?

I would certainly hope so. A lot of people have argued, “We can’t pay attention to the environment now because we’re growing our economies and if we do pay attention to the environment our economies will suffer.” There’s a lot of evidence that shows that tradeoff doesn’t have to happen. To the extent that businesses are saying we actually can do both, that gives the politicians more courage and more of a basis for also saying, “We can do both and we should do both.” In most parts of the world, the problems associated with a changing climate are becoming visible and are turning into risks that people have to manage. Once you have a risk you need to manage, there’s a business opportunity.

You know who the key actors in Paris are. Is there anything in particular that you’re watching for or paying attention to?

I’m always interested in the money: Where is the money? How is it flowing? There are really two components to that. One is, where is the public money that’s coming from wealthier nations being made available to less-wealthy nations, particularly the most vulnerable, poorer nations, like island nations and other and low-lying coastal areas?

I’m interested in the ones that are vulnerable not only because of their physical situations but also because of their socioeconomic situations. The issue that’s always worried me about the climate negotiations is that if you look at the amount of available capital in the world for doing anything, the amount of available public finance is always going to be much smaller than the amount of available private finance because public finance is based on taxes or fees or other things like that. The negotiators have traditionally limited the talks to public finance. That’s not going to get us where we need to go if you’re thinking about dealing with a problem on the scale of climate change. I think that private investment in adaptation to the effects of climate change will happen naturally because people have coastal properties and other interests that they’ll need to protect. It may not protect it well, but it’s an incentive.

The harder part is determining, what are the incentives for private investment in reducing the effects of climate change by either reducing emissions or removing  them from the atmosphere? Movement in that area will take a kind of energy transformation that will require policy support in a wide variety of ways. That will require the negotiators of the treaty to say that we need to add talking about private capital to the question of investment. It’s not just public investment. It’s also incentives for private investment.

You are starting to see efforts to assess the economic risks of climate change, like the Risky Business Project. There are also more moves by private investors to account for how climate change is likely to affect their investments. How exactly the negotiation process, the treaty process, will support incentives for more private capital to be invested in reducing emissions, removing carbon, adapting to the effects of climate change is the area where we need a lot more activity and one that has been hard for the negotiations to deal with.

What are one or two possible meaningful actions that you think will create a lasting impact as a result of the negotiations?

There needs to be demand for a response. Again, that takes us back to the hopeful aspects of the survey of MBA students. Who would have thought that there would be so many MBA students in support of private and public action to help reduce the emissions and reduce the impacts of climate change? Maybe that’s an indication that the political tide is turning. I’m sorry that many political leaders are followers, not leaders, but so be it. If the political tide is turning, if more people are saying this is an important topic, I think that’s really a good start.

People sometimes equate the Climate March in New York— which had a surprising number of participants in it—to the hopes for the Paris summit as indicators that the political calculus is shifting, to say, “We need to pay more attention here.” Obviously it’s not shifting everywhere and there are lots of entrenched interests, but I think it’s hopeful in that regard.

There’s an aspect of the talks that is really insider-baseball. The professional negotiators have been doing this for decades so I tend to pay less attention to that and more attention to what’s the groundswell around that, or what has been described as the jazz concert. It’s usually been the side events and questions like, “What are cities doing, what are companies doing, what are NGO’s doing?” that are more exciting than, “What are the nation-state negotiators doing?” I think this year the nation-state negotiators are hoping to have more of an impact because they’ve been able to take this bottom-up approach and convert some of that momentum into hope for a new treaty. With the financial crises in Europe and the U.S. taking a budget-minded approach, however, finance will continue to be one of the big challenges. There’s not a lot of extra cash wallowing around.

Is there a generational change that can make a difference?

Some would argue that one of the impacts of the internet, social media, and digital technology is to connect people to a broader sense of “we” in various ways. That may also change how people view and approach climate change: if you come from a wealthier background you may feel that you can make some tradeoffs between just getting a job versus getting a job with meaning or getting a job with broader social goals. Many more people in the world are getting wealthier and have the opportunity to consume more, but that also is a threat to the way the world has been.

It’s like resource management: if resources are available freely or widely, you know markets don’t really get involved or people don’t really have conflicts over access to them. When you have scarcity or constraints on resources, then you start seeing more attention being paid to, “How do I get my share?” “Why are they getting more?” and “What’s a fair share?” Fundamentally, that’s what’s going on around access to all sorts of different resources, including access to places one can live or grow food with a changing climate. For better or for worse, opinions change when the issue directly impacts someone’s lifestyle. Either it becomes important to their friend group, their jobs, or their families. The hockey-stick graphs show how as the human population and wealth grow, our consumption has a significant impact on the planet and its systems, including the climate. So we’re seeing changes in opinion driven by changes in what we have available and the terms on which it’s available.