Now Is The Perfect Storm In Africa’s Power Sector 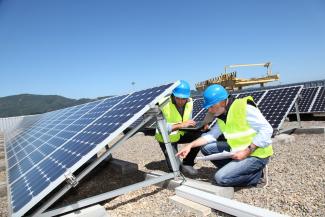 The recent announcement by South Africa’s Energy Minster, Tina Joemat-Pettersson, of another 13 preferred bidders for wind and solar photovoltaic (PV) projects in SA is good news not just for South Africans struggling with Eskom power cuts, but for the continent as a whole.

The announcement means that private sector investment in renewable energy generation will reach R193 billion, with R19.1 billion committed to socio-economic development. South Africa has commissioned 92 renewable projects in less than three years with the potential to add a much-needed 6,327 megawatts of capacity to the grid.

South Africa’s Renewable Energy Independent Power Providers’ Procurement Programme (REIPPPP) has been labelled by one investor as “the most successful public-private partnership in Africa in the last 20 years.” It is among the top ten privately funded renewable energy programmes in the world. And, according to Professor Anton Eberhard, chair of deputy president Cyril Ramaphosa’s energy advisory panel and director of the Management Programme on Infrastructure Reform and Regulation at University of Cape Town Graduate School of Business (UCT-GSB), its potential for roll out – with some adjustments – to the rest of the continent is vast. Eberhard says the ongoing success of South Africa’s REIPPPP points the way on how to procure alternative energy projects quickly and effectively in developing countries.

According to a recent McKinsey report, almost 600 million people lack access to electricity in sub-Saharan Africa, making it the worst electricity crisis in the world. Only seven countries – Cameroon, Côte d’Ivoire, Gabon, Ghana, Namibia, Senegal and South Africa – have electricity access rates exceeding 50%. The rest of the region has an average grid access rate of just 20%. The Brighter Africa report projects that sub-Saharan Africa will consume about 1,600 terawatt hours by 2040, four times of what was used in 2010 – as much electricity used by India and Latin America in 2010, combined – but 20% to 30% of the continent’s population will still not have access to electricity. It estimates that if every country carries out the most cost-effective expansion of their power sector, the investments needed to 2040 would be $490 billion of capital for new generating capacity, plus another $345 billion for transmission and distribution.

Speaking at the United Nations Secretary General’s Climate Summit last year, chairperson of the African Union, Nkosazana Dlamini-Zuma said: “Africa’s surging economic growth can be fuelled by an energy mix that emphasizes the development of its vast renewable energy resources. Four-fifths of electricity in Eastern and Southern Africa is generated from carbon-bearing fossil fuels. Regional demand for electricity is expected to at least double over the next quarter century.”

Key projects on the go include the Africa Clean Energy Corridor (ACEC) endorsed by 19 Eastern and Southern African countries, which aims to expand the portion of renewable energy used by the Eastern Africa Power Pool and Southern African Power Pool from its current 12% to at least 40% by 2030, and the South Africa/Democratic Republic of Congo Treaty on importing hydroelectricity from Inga, which came into force in March 2015. The Treaty obliges South Africa to negotiate an off-take agreement for the purchase of 2,500 megawatts of electricity generated from the Inga phase 3 Low Head project. It is said the project will have a transformational impact on the Democratic Republic of Congo, as well as the entire Southern African region and is important to the strategic plans of the African Union. The multi-phase hydro power station has the potential to generate about 40,000 megawatts – sufficient to power half of Africa.

Meantime, Uganda is ranked tenth by Bloomberg in a global survey of investment climate and policies for clean energy investment among 55 emerging economies. It’s GET FiT programme has grown to a planned installed capacity of 128 megawatts and with a promising pipeline for the third and likely final Request for Proposals concluded in the first half of 2015, the programme is on track for achieving a sizeable and diverse project portfolio of renewable energy generation projects.

Eberhard, who also teaches an executive education and professional short course in power sector reform and regulation at the UCT GSB, says that a great advantage of these initiatives is that they provide African-specific examples from which others can learn. His short course annually brings together leaders working in the power sector from around 12 to 15 African countries and creates a powerful learning network for a continent battling to adapt to new regulatory regimes and reform utilities to deliver expanded and affordable services for the poor, while underpinning and supporting economic growth.

He says that a key lesson to be shared from the success of the REIPPP and Get FiT is that there are significant benefits to be gained from a well-designed and transparent procurement process. Private sponsors and financiers are willing to invest in renewable energy if the procurement process is well designed and transparent, transactions have reasonable levels of profitability, and key risks are mitigated by government.

A further lesson is that competition drives down prices. “Unfortunately, most African countries entertain unsolicited offers of new power and engage in direct negotiations without being able to assess whether the prices offered are competitive. Any country can organise an international competitive bid and benefit from lower prices, although some care needs to be taken to lower transaction costs and qualification criteria to encourage as much competition as possible,” Eberhard says.

In most developing countries, a convincing case needs to be made repeatedly to justify the procurement of renewable energy. Eberhard says the REIPPPP was preceded by years of policy proposals that supported climate change mitigation. This background, combined with the looming threat of power shortages in the country, and frustration with Eskom’s lack of action on IPPs, meant that REIPPPP was initially given the benefit of the doubt, even by critics of renewable energy costs.

The resulting success is showing the rest of the continent the way. The perfect storm of energy supply and demand must be weathered with cost-effective renewable power options and enabling frameworks to attract investments, only then will Africa’s vast renewable energy resources have the power to dramatically accelerate economic growth, job creation, energy security and the increasing generation of clean electricity on the continent.