The Nobel Prize in Economics and the Dangers of Foreign Aid 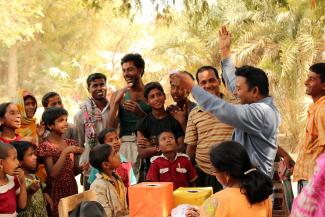 Professor Angus Deaton deservedly won the Nobel Prize last month for his seminal work on micro-level data and measurement in economics. This has led to prominent news coverage of Professor Deaton’s views on an issue unrelated to the contributions that won him the prize: the dangers of foreign aid.

Professor Deaton made a theoretical point about aid in the last chapter of his book The Great Escape, writing that “large inflows of foreign aid change local politics for the worse and undercut the institutions needed to foster long run growth.” He largely relies on anecdotes to support this theory—examples that he himself would not consider the type of “rigorous empirical research” for which he is justly famous. His view echoes other popular writing on the topic by the economist Bill Easterly and others, who claim that aid extends the tenure of corrupt, incapable leaders who use the external funds to distract attention and placate constituents.

Deaton’s opinions about foreign aid became the focus of media coverage following the Nobel Prize announcement. The Washington Post even made a false connection between these opinions and his seminal contributions, writing, “Deaton’s skepticism about the benefits of foreign aid grew out of his research, which involved looking in detail at households in the developing world, where he could see the effects of foreign aid intervention.” The problem with this statement is that there is no research paper in which Deaton has empirically studied the effect of any foreign aid intervention.

I feel compelled to challenge this negative opinion about aid, because the stakes for poor countries are so high. The U.S. already allots a much lower fraction of its GDP to aid than other developed nations (and even much of that goes to the wrong places to satisfy political, rather than humanitarian objectives), and there is periodic political pressure to further reduce our obligations. So when a negative opinion about aid that is not evidence-based is given the sheen of a Nobel Prize by association in the media, we should turn to the available empirical evidence.

What do we know, empirically, about the effects of foreign aid on economic growth in recipient countries? The answer, sadly, is, not much at all. A highly cited paper once claimed that foreign aid is beneficial only in countries with high-quality institutions, and this finding subsequently even motivated the creation of a separate agency to channel U.S. government aid to poor countries. Upon closer inspection, the empirical result turned out to not be robust to small perturbations to the data. The fragility of this result, and the lessons learnt from this experience, are coincidentally related to one of the contributions for which Professor Deaton won the Nobel: that we cannot rely solely on aggregated, macroeconomic data to enact policies, because those data are notoriously unreliable. It is often necessary for us to do careful measurement at the micro level.

Luckily, we now have better micro evidence on Deaton’s specific theoretical claim that foreign aid corrupts developing-country governments and undermines political accountability. This claim suggests that citizens of developing countries are systematically and consistently fooled: that they give undeserved credit to local leaders for external aid, which prevents the root cause of under- development—bad leadership—from getting diagnosed and fixed.

I have recently conducted research to rigorously evaluate this specific argument, by collecting the type of micro-level data (on 18,000 households in rural Bangladesh) that Professor Deaton and my other intellectual forbearers have taught me to use. Along with collaborators, I implemented a large-scale field experiment that tracked how local politicians and their constituents in rural Bangladesh reacted to the arrival of a development program that was funded externally (by the Bill and Melinda Gates Foundation). The program randomly assigned sanitation services to some villages but not others within the same local political jurisdiction. Politicians subsequently started spending more time in the (randomly chosen) treatment villages, and requested to make speeches at our distribution ceremonies. In short, they tried to associate themselves with the program to claim credit. Constituents in treatment villages observed those speeches, and promptly started evaluating those leaders more positively than their counterparts in control villages, even though the leaders in reality had nothing to do with the program’s allocation. In an environment of uncertainty, constituents (rationally) misattribute some credit, which fits Deaton’s narrative quite well.

However, further experimentation indicates that citizens in developing countries, when given a little information, can assess their leaders more accurately. In a version of the program where allocation was transparently random (subsidy vouchers were assigned through on-the-spot lotteries conducted in front of villagers), beneficiaries were no more likely to attribute credit to their leaders than non-beneficiaries. Furthermore, when we returned to the households in which citizens had originally misattributed credit in order to gently and indirectly let them know that the local politician did not influence program assignment, the misattribution was completely reversed. A more accurate understanding took hold both in the households we spoke to directly and in other households in the same community that we did not visit, which implies that this information spread easily and rapidly.

In summary, voters in rural Bangladesh are not so easily fooled by their leaders. Political accountability is not necessarily undermined by foreign aid: even illiterate and semi-literate folks in rural Bangladesh appear to be quite sophisticated about how they evaluate their leaders, given the information they possess. Further, any unintended negative accountability consequences were effectively countered by a simple, scalable information campaign. This implies that aid delivered in a smart way is not doomed to do more harm than good.

These results only refer to data collected from the 72,000 people living in four sub-districts in rural Bangladesh. Professor Deaton would be correct to point out that it is not clear whether these results would generalize to other settings. However, this is the type of rigorous empirical evidence that theories of foreign aid must now confront, thanks to the developments in measurement that was awarded a Nobel Prize in economics this year.