How Will the Trans-Pacific Partnership Affect Global Business?

This week, 12 nations around the Pacific reached an agreement on the Trans-Pacific Partnership. Global Network Perspectives asked experts across the Global Network for Advanced Management how the trade deal would impact their countries. 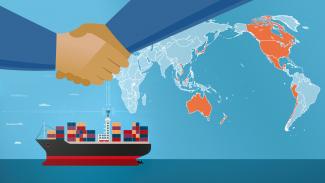 This week, 12 nations around the Pacific Rim, including Canada, Chile, Japan, Mexico, and the United States, reached agreement on the Trans-Pacific Partnership. The trade agreement could reshape business practices across the world, potentially lowering tariffs for some goods and making foreign goods more readily available, as well as bringing worker standards into greater alignment. Opponents of the trade pact say that it could adversely affect agriculture and intellectual property rights in some countries. Global Network Perspectives asked experts across the Global Network for Advanced Mangement how the deal would impact their countries.

This interview is adapted from an article originally published on the Sauder School of Business website.

Why should Canadians care about the Trans-Pacific Partnership?

The TPP will likely benefit Canadian consumers via lower prices and more foreign varieties. In my research on the world car industry with Sciences Po Economics Professor Thierry Mayer, we find that Canadian car buyers will obtain gains of three to seven per cent, depending on the success the TPP has in deepening integration between members.

For businesses, the TPP would expand tariff-free access to a variety of countries where Canadian exporters currently face high tariffs, in particular Malaysia and Vietnam. The agreement would facilitate Canadian exports to Japan, the third-largest economy in the world. If Canada were to drop out of the TPP, Japanese firms would still gain better access to the American and Mexican markets where Canada currently has advantageous access via NAFTA. This would undermine the incentives of Japanese firms to produce in Canada. Finally, the TPP’s investor-state dispute mechanisms may increase confidence for Canadians wishing to do business in less developed countries such as Peru, Malaysia and Vietnam.

For a long time the main reluctance seemed to come from concerns of dairy producers in Quebec. They were reportedly worried about new competition from New Zealand’s dairy industry. Their other concern would be if tariffs went down on New Zealand dairy, they might also go down on U.S. dairy, an exception that Canada managed to carve out from its free-trade agreement with the U.S.

Recently the Canadian auto industry has raised red flags—what are their concerns?

This is a new point of contention. The U.S. reportedly agreed to a substantial lowering of the content requirements for imported autos. Instead of requiring more than 60 per cent of the value of parts to be of member origin, as in NAFTA, the Japanese may have been promised a deal where the TPP content could fall as low as 45 per cent. Canadian negotiators were reportedly upset both by the process (side deals being agreed upon without proper consultation) and by the issue itself.

The worry seems to be that Japanese cars made with large amounts of Chinese parts would make life difficult for Canadian workers in the industry. They might even lower the rationale for having Honda and Toyota plants in Ontario.

What does your research reveal about how things might play out for Canadian autoworkers?

Running various trade deal scenarios through our model we find that employment in the Ontario assembly factories could shrink as much as nine per cent or increase by as much as 14 per cent. The reason it’s so hard to pin down a number is that the TPP contains a lot of different measures aimed at deeper integration between members and we don’t have a lot of historical evidence to tell us what each of those measures would do.

Are the concerns of dairy farmers and automakers the most important ones?

While these are the issues that seem to be on Canadian negotiator’s minds, I would argue that the bigger concern ought to be what is being given away in terms of intellectual property rules. Once again the U.S. appears intent on trying to lengthen patent protection, a policy mainly aimed at increasing prices for its pharmaceutical companies. This would not be in Canadian consumer interest and I think it should be resisted. It could also prove harmful to the other members of the TPP. I’ve seen research that the WTO-related strengthening of patent protection caused large transfers from less developed countries (and Canada) to the U.S. Such transfers can wipe out the gains from trade. Furthermore an increasing number of analysts argue that patents are a lousy way to stimulate invention. They should be reined in, not super-charged.

I think the consumer interest in greater access to imported dairy and imported cars is strong. But I would be very happy if we banded together with other countries to resist increases in intellectual property protection.

In international economics the concepts of comparative advantage and specialization play important roles when deciding what to produce and how international trade should take place. More importantly, it is well recognized that countries gain more when they trade products and services with greater added value and when they develop sustainable production and supply chains with a long-term vision.

Mexico´s plus trillion dollar economy is heavily export oriented, increasingly so in the 20 years since entering the North American Free Trade Agreement (NAFTA). With over 50 free trade agreements in place, Mexico faces ongoing challenges to ensure the competitiveness of its economy in terms of productivity, cost base, added value and logistics, to name just a few areas.

For Mexico, the Trans-Pacific Partnership (TPP) represents an opportunity to participate in one of the most important trade agreements globally and certainly the most important trade agreement in the Asia-Pacific region in terms of size and impact. Mexico seeks to open new export markets, integrate trade and support the creation and retention of high-quality Mexican jobs, by increasing exports in a region that includes some of the world’s most robust economies and that represents nearly 40% of global GDP. Twenty years ago, Mexico experienced a similar opportunity in terms of impact and size with the North American Free Trade Agreement (NAFTA), and participation in the NAFTA has since enabled Mexico to grow its exports five times, benefiting in particular the Mexican manufacturing sector. With the Trans-Pacific Partnership (TPP), some of the same types of concerns are present today: which sectors are ready to compete and which sectors need to enhance their competitiveness? TTP negotiations have turned out to be difficult since the 12 member countries are—as expected—fiercely attempting to protect their own industries and markets, and indeed agreeing the very rules that will define a common agreement for trade and investment integration, intellectual property, environmental and labor policies and other areas, are already providing for testing negotiations.

The TPP represents an enormous opportunity for Mexico but, at the same time, a challenge to reach new key markets with countries that currently represent a trade deficit for Mexico, such as Malaysia, Vietnam, Singapore and New Zealand. These economies are also key partners of the United States, which is Mexico´s major trade partner, and of China, a huge competitor for the Mexican economy. Sectors such as high-end manufacturing and car industries will be more exposed to even more competition representing a big challenge for Mexico in the TPP. If Mexico wishes to succeed and fully optimize the benefits of the TPP, it must seek a balance in terms of trade with the TPP members by defining and ensuring that key sectors and industries in the Mexican economy are even more competitive.

Brazil has put much of its efforts toward the two so-called integration arrangements that explicitly exclude the U.S. and Canada: the Union of South American Nations (UNASUR) and the relatively new Community of Latin American and Caribbean States, CELAC. Furthermore, Mercosur has also dedicated much effort into expansion —Venezuela and Bolivia were admitted as full members—instead on deepening liberalization. In fact, intra-Mercosur trade peaked 15 years ago. Today, intra-regional exports only represent 15% (average over the past decade), down from its peak of 25%. With its two main economies in recession, Mercosur’s intra-regional exports might reduce even more.

Their study highlights considerable negative drawbacks for the Brazilian economy in all three simulations of the TPP agreement. In the first simulation negative impacts can become more substantial, when TPP partners gain competitiveness due the agreement.

Once China joins the TPP partnership, losses for the Brazilian economy become more dramatic, particularly, when non-tariff barriers are reduced. The latter demonstrates the importance of the negotiation of rules in PTAs, which have direct impact on market access.  Let me quote the estimated results of the study (Thorstensen and Ferraz, 2014, p. 15):

Taking on the words of my colleague Vera: It is time for action for Brazil.