How are we going to deal with Gen Y in our organizations? Nora Grasselli reflects on their characteristics, expectations, and demands as well as how to respond to them as a leader. 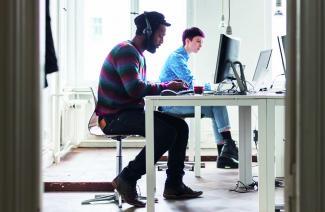 It was more than a decade ago that members of a new generation – the so-called Generation Y, or simply “GenY” – started entering the workforce. These young people, in their late twenties and early thirties, represent the first wave of “digital natives” in our organizations.

The information we have about them looks confusing. They were tested in Pisa studies when they went to school and – with the exception of students from Finland, South Korea, and Liechtenstein – did poorly. We stereotyped them for their obsessions with social media channels, first-person shooter games, “casting” shows, “twerking,” “tweeting,” and “chatting” and found them very different from Baby Boomers or Gen X-ers.

But according to an IBM survey from 2014, GenY members are actually not so different from their predecessors. Just as much as Gen X-ers or Baby Boomers, they stress the importance of inspirational leadership, clearly articulated business strategies, performance-based recognition, and promotions. Sure, Gen Y-ers are adept at interacting online, but when it comes to acquiring new work-related knowledge and skills, for example, they prefer face-to-face contact. And when they change jobs, they do so for much the same reasons as Gen X-ers and Baby Boomers, namely, to “enter the fast lane,” “shoot for the top,” “follow one’s heart,” or “save the world.”

GenY members, however, see themselves as being different from their predecessors. They claim that the conventional business insignia of power – position, bonus, cars – are meaningless. Their status symbols include having the time for living flexibly, attaining self-efficacy, and doing work that makes sense. At work they expect a mentor coaching them rather than a superior telling them what to do. They also demand an open corporate culture, and that they be treated and paid fairly.

According to a study of the Berlin trendence Institut from 2013, nearly 50 percent of those who studied business administration claimed that their future employers have to be ethical. Thirty-nine percent of future engineers surveyed stated that they would not work for a company with a poor social image, even if the salary was attractive.

GenY is the first generation for whom equal opportunities for men and women are a matter of course. In their relationships, they plan to equally divide household and parenting duties, and whether their boss is female or male is a question of little or no concern.

In her book on GenY, Kerstin Bund summarizes what her generation really wants at work:

Overall, they expect that their work and private lives are what will make them happy, not waiting for their happiness to start after hours.

Which skills, which attitudes, and what types of knowledge does the chieftain need to successfully lead the Y-tribe?

As with previous leadership concepts, there is no one best way. But we can assume that – taken GenY’s need for equality – democratic, discussion-based methods are more effective than commands or rules and regulations. Inspiring followers is more important than pacesetting or raising the bar.

Leaders of GenY will have to convince with their personalities. They are part of the sense that the job has to make. Making time for family and investing in non-work-related hobbies are goals of theirs as well. GenY members do not accept people who dedicate themselves to their jobs 24/7.

GenY leaders have to keep the development of their team members in mind. Among other things, they must learn how to operate using regular feedback instead of orders or rules.

GenY is redefining the leader-follower relationship. As their leader, you better expect a large number of new ideas – and accept that 95 percent will end up in the trash. The good news is that you will finally have access to innovative ideas “from the shopfloor” and that the 5 percent you keep are brilliant.

GenY members have not had authoritarian upbringings – their parents are nurturers rather than dictators. As a result, their children have no problem saying what they think, and they expect to be heard. They will ask questions, criticize decisions, and speak up. They may be right or wrong.

Those leading – or planning to lead – GenY members are encouraged to follow some sound advice: Be prepared to be made uncomfortable. Often, you will hear things you would prefer not to hear. Even prepare to get angry, as your title, your seniority, and even your achievements will not stop GenY members from telling you what they think. The culture you need to create as a chieftain needs to be fast, flexible, and frank. It must be able to channel ideas, criticisms, and questions. If you and your GenY team do it right, they, your organization, and you as a leader can benefit from the dialogue.