Why Keep It Quiet?

They say we learn from our mistakes. If that is true, then we should welcome errors as an opportunity to learn and tell other people about it. Managers in particular should be interested in doing that, but somehow it doesn’t work that way. 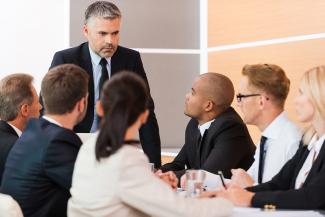 Errors are often associated with shoddy work, failure or personal weakness. That is why we find it unpleasant to discuss them openly. However, mistakes are not necessarily down to carelessness or a lack of skill and ability. A person may be distracted, tired or overburdened. The problem may, in fact, lie in the work environment.

To get to the bottom of things, we asked 360 managers from different sectors about how they deal with errors. Above all, we looked at their willingness to discuss mistakes: top-down, bottom-up and among direct colleagues. Some 41 percent of those questioned worked in companies with over 10,000 employees. The managers’ average age was 43, and they were in charge of an average of 150 employees with a minimum of 8. Women accounted for 12 percent.

How do managers address errors made by employees, colleagues and superiors?

Our survey revealed that, if they discovered an error made by an employee or colleague, 88 percent of managers would raise the issue privately behind closed doors. Only 11 percent would discuss it openly. Just one percent would ignore the error.

When it comes to pointing out a mistake made by someone higher up the ranks, 86 percent would do so in private. Only 4 percent would be prepared to broach the issue openly. Ten percent would rather keep any error made by their superior to themselves.

How do employees, colleagues and superiors report errors?

We asked managers how their own employees, colleagues and superiors speak to them about errors. Just 54 percent said they would mainly do so in private. 18 percent said mistakes were addressed in a more open forum. A further 28 percent assumed they were never actually made aware of their mistakes.

However, these figures do not tally with the previous results. Of those questioned, 88 percent claimed that they themselves would generally address errors made by others in private. Yet only 54 percent believed they are being informed of errors in this way. In contrast with the 11 percent quoted earlier, 18 percent said their own errors are discussed openly in front of people. That could be because this experience has stuck in their minds more than those occasions in which they addressed others’ mistakes in a public forum.

There were also some interesting differences between the answers provided by male and female managers. Both sexes would prefer to speak to their superiors about an error in private. However, this tendency was slightly less pronounced among the female managers (78 percent compared to 87 percent of male managers). In contrast, female managers were almost three times more willing than their male colleagues to discuss errors openly. 10 percent of those questioned admitted that they would never openly address errors made by their superiors. At 67 percent, the women in this group were instead more likely to talk about a mistake made by their superior behind his or her back. Only 39 percent of the male managers would behave in this way, with the majority opting to keep silent.

How do managers rate their corporate culture?

According to our survey, errors are perceived to be part of a company’s normal operations. Of those questioned, 75 percent agreed with this view. Just 25 percent felt errors were the result of careless work and associated them with a feeling of embarrassment and/or sanctions.

What does this mean?

Most companies still have a long way to go before error management becomes part and parcel of day-to-day life, even if, in theory, we are almost there. Our survey confirmed that, for the most part, managers accept errors as a normal part of working life. But there is one aspect that does not fit, i.e., the overwhelming preference for discussing errors in private and involving as few people as possible. It is a situation that is still associated with a certain degree of shame and embarrassment. That does not even begin to address the alternatives of remaining silent or whispering in secret.