One of the key contributions of economic sociology to the understanding of markets has been the modeling of how the network structure within which firms are embedded influences firm behavior and outcomes. A new study merges several network models to describe the ownership patterns of publicly traded Indian firms — and what these mean for business. 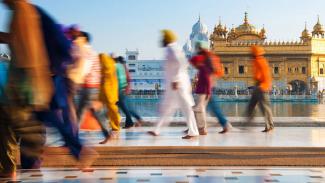 “When looking at business relationships in non-Western countries, there are family ties, community ties, loan ties, and dense ownership ties connecting firms overlaid with trade. You get the feeling that some weird cultural opaque stuff is going on,” says HEC Paris researcher Dahlia Mani. For instance, Indian software consultancy firm Infosys and its rival Tata Consultancy Services (TCS) both vie for the title of best Indian IT firm. Given their apparent similarities, why is Infosys less successful compared to Tata in penetrating the domestic corporate market for software and technology services? Herself from India, Dahlia Mani began her sociological research on the Indian economy from the point of view of an outsider trying to understand the seemingly murky relationships between firms. Having just published a paper about the Indian firm ownership network, she says it is a matter of “taking a step back” and looking not just at firm-level ties, but rather the larger network, “at the macro level.” Dahlia Mani asked questions such as: are all firms embedded within dense networks or is it just some firms? Which are the firms that tend to be embedded within dense networks, and what does it mean for how they behave? Indeed, returning to the example of Infosys and TCS, a difference in intercorporate ties could explain TCS’s dominance in the Indian IT market. Infosys, although an international heavyweight, is in an isolated position in the Indian corporate network compared to its rival, which is affiliated to the densely connected Tata business group.

The way a network is structured is crucial. As Dahlia Mani writes in her paper, co-authored with James Moody from Duke University in the US, “network models provide a snapshot of the flow of information and resources within an economy [...] and contain assumptions and predictions about the behavior of embedded actors.” In other words, the behavior of companies embedded in a larger network is different from that of isolated actors, and this has implications in terms of performance, innovation and corporate governance. “Intuitively, you would expect a company embedded within a dense network of ties with other companies to behave differently from a company with no or few partnerships,” says Dahlia Mani. Yet there has been very little research into the macrostructure of the network of firms, and the little that has been conducted focused on the US and Germany but never on the emerging world. Academic papers have defined different network models. From the very simplistic dyads — pairs of connected firms — of early classical economics, theory has moved forward to several different network models. In a “core-periphery” structure, one core element controls flows towards a disconnected peripher. In a “small world” model, there are tight-knit clusters of firms, linked to other clusters with sparse ties. Finally, a “nested world” model is a multicore network, with strongly connected subsets embedded within a wider structure; in other words, this model can be thought of as clusters of firms connected to each other with multiple ties. In their pioneering work, Dahlia Mani and her co-author used these models to describe the firm ownership network in India.

The researchers gathered data published by the Centre for Monitoring Indian Economy about who owns which publicly traded firms in India in 2001 and 2005. They formed more than 40,000 firm-ownership pairs, and searched for patterns. Dahlia Mani did not expect a whole economy to follow a single model. Her findings indeed show a high degree of variation in India, with firms embedded in different network regions. To be more precise, in 2001, some 42% of the 2,781 publicly traded firms in the Indian ownership network, were either isolated or in dyads and categorized as falling within the “disconnected periphery” of classical market theory. For example, Infosys Technologies is isolated, with shareholding ties only to its promoters. Another 20% of the total, formed isolated clusters. 24% conformed to the “small world” archetypical structure of dense clusters weakly linked to the rest of the network. (All proportions were comparable in 2005.) The shareholders in some of these clusters had the same surnames (Biyani in the Pantaloon group for instance), which indicates a family business group, with few ties to the rest of the network. The remainder, 14%, formed a highly nested structure, composed of clusters of firms (i.e., business groups) connected to other clusters with multiple ties. They also turned out to be the largest and most prominent business groups in India, with the Tata business group being the most deeply nested.

Dahlia Mani stresses that the variations are not random: “Nested and isolated firms for example tend to have been founded at different periods in history, with founders coming from different backgrounds, and so on.” In particular, she finds that isolated firms such as Infosys tend to have been created in the post-liberalization years, or after 1991. “Some are traded on the New York Stock Exchange and are geared towards the global market.” On the other hand, large diversified groups, such as Tata or Birla, were formed pre-liberalization and, because they had less access to external capital, instead relied on raising capital from other Indian businesses. The position of different firms within the network not only reflects economic history, it also has consequences on the partnership behavior of these firms. Looking at the value of transactions, the data shows that partnerships of firms in the nested world have higher multiplexity and transaction value compared to those of the isolated and small worlds.

Based on an interview with Dahlia Mani and her paper “Moving beyond Stylized Economic Network Models: The Hybrid World of the Indian Firm Ownership Network,” co-authored with James Moody and published in American Journal of Sociology, Vol. 119, No.6 (May 2014).