Forty-two percent of women polled in a new survey and 15% of men experienced some form of sexual harassment or gender discrimination in the past year, according to a report from the Global Network for Advanced Management. Among them, fewer than one in ten formally reported the incident(s) inside or outside the workplace. And two-thirds of total respondents agree that “the existence of a culture of sexual harassment at a workplace is a factor when you look for a job.”

Says survey co-designer and co-author Frances Rosenbluth, Damon Wells Professor of Political Science at Yale University: “New evidence suggests that establishing a reputation for a workplace free of sexual harassment is likely to be one of the most effective ways employers can compete for talent in a global workforce. Recognizing the problem, and dealing with it effectively, offers employers a winning strategy for recruiting and retaining valuable human capital.”

Sexual harassment remains prevalent in the global business community, even among the business elite.

Among the 2,642 respondents who have held a job in the last 12 months, 42% of women and 15% of men self-reported some form of sexual harassment or gender discrimination in the past twelve months. Even if we exclude complaints about sexism or misogyny, over a third of the women reported sexual harassment from a workplace manager or colleague in the past twelve months.

Most agree that victims should be trusted, but victims still fail to report.

Among the Global Network respondents who said they experienced sexual harassment or gender discrimination in the last 12 months, fewer than one in ten victims formally reported the incident(s) inside or outside their workplaces. Of our respondents who said they experienced misconduct, only 5%, consulted their boss, their human resources department, or other units specializing in sexual harassment issues inside the firm. Reporting to outside entities was even rarer.
Tolerance of sexual harassment hurts recruitment.
About two-thirds of the survey respondents agreed that “the existence of a culture of sexual harassment at a workplace is a factor when you look for a job.” The frequency of this response was slightly higher among full-time students (67%) than among currently employed students and alumni (62%), and higher among women (78%) than among men (55%). 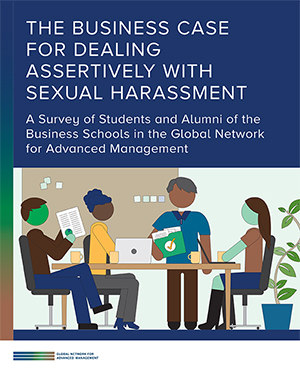