#GNW2015: Why Is Walmart More Expensive in China?

Walmart’s slogan “Everyday low prices” doesn’t have quite the same ring in Shanghai. While Western consumers are accustomed to affordable prices from the retail giant, pricing at Walmart in China is often higher than at other outlets—even when the same Chinese-made products are being sold.

The reason is directly connected to how the Chinese government uses its policies to shape markets, at home and abroad, according to Professor Yihong Yu, who teaches industrial economics at School of Management, Fudan University. “You do not see the consumption price on the product,” Yu said on October 19 during Fudan’s Global Network Week program. “The question you ask yourself is, ‘Why is this happening? Why would that continue to happen?’”

Speaking with students on the first day of the program, Yu discussed the changing state of China, the growth of the Chinese middle class, and how government policies have shaped the country’s rapid growth in the past 30 years 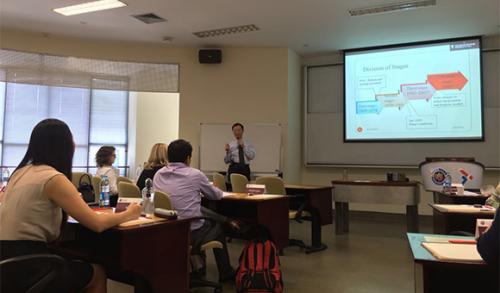 The explanation for the high prices at Walmart, Yu said, is that with a rapidly growing Chinese middle class, the popularity of foreign-owned consumer companies provides an opportunity for the government to boost its own programs. China subsidizes the goods sold to consumers in the United States, because the Chinese government wants to remain competitive in foreign markets abroad. When the same Chinese-made goods are sold domestically at Walmart, though, they appear at a markup.

“When you export a product, there’s stiff competition abroad,” Yu said. “The government can charge more here because the product is sold by a foreign company.”

As a result, the government gets higher tax revenues, while giving a boost to the Chinese companies that sell products at a discounted rate. Neverthless, Yu said, the demand among Chinese consumers for products from Walmart and other foreign-owned companies continues to grow.