#GNW2015: What Could a Change in China’s One-Child Policy Mean for Business?

As part of a market-entry strategy session held during Fudan University’s Global Network Week module, students explored the opportunities presented by a possible change in the one-child policy.

As China considers further easing its one-child policy, which in recent years has allowed some rural families to have two children, some scholars are considering how the policy change might affect business.

When coupled with the growth in the country’s middle class, such a change could have a sizeable impact, said Professor Cheng-Hua Tzeng of Fudan University’s School of Management in a market-entry strategy session held during Fudan’s Global Network Week module. In particular, Tzeng told students, both Chinese companies and foreign investors would benefit from increased sales opportunities.

Tzeng pointed to the automobile industry as an example. As the middle class expands year over year, he said, more Chinese consumers are purchasing cars for themselves and their children as status symbols. More children would mean more cars to purchase; the same is true for other consumer goods that appeal to the middle class. Companies should prepare now for increased demand.

“This will not have an impact in the next 5 years, but in the next 12 years, companies would need to be ready for a change in the family structure,” Tzeng said. “Maybe you already have some insights now about a larger family structure. You need to plan now for the opportunities that are coming in the next 20 years. It means there will be sales for more snacks, more electronics, more items.” 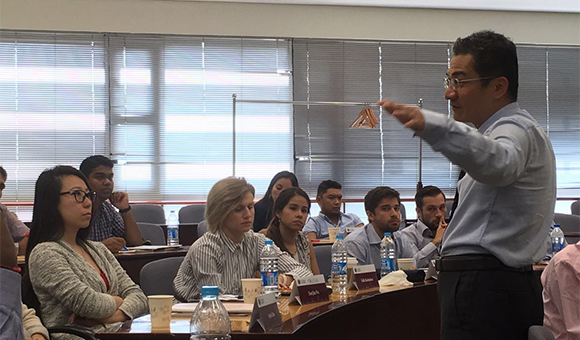 The psychological effects of a change in policy would also change Chinese consumer behavior, Tzeng said. Under the one-child policy, families typically call their children “little emperors”: they are the center of attention for most of their lives. Tzeng said that a potential decline in only children could create customers who are different from those to whom Chinese companies are used to marketing.

“It’s an important detail to understand the personalities of who you are dealing with and how that will change,” Tzeng said. “Compromise hasn’t been much of an issue for many in this generation, but that too will change.”

Students from Global Network schools are teaming up online to make cities more resilient and to develop solutions to meet the challenges faced by climate change and increased urbanization.

A Course on Labor Standards for a Global Workforce

Virtual collaboration skills sharpened by months of remote learning helped students from 11 schools in the Global Network for Advanced Management accelerate their learning in the Global Virtual Teams course, which culminates in a simulated, real-time negotiation exercise.