When Pick N Pay founder Raymond Ackerman started his grocery market in 1966, the company built in social responsibility as part of its overall strategy. Apartheid had begun in the country, segregating the country’s blacks and whites, but Ackerman believed that the policy of racial discrimination would end one day and hired black employees even when it was against the law. 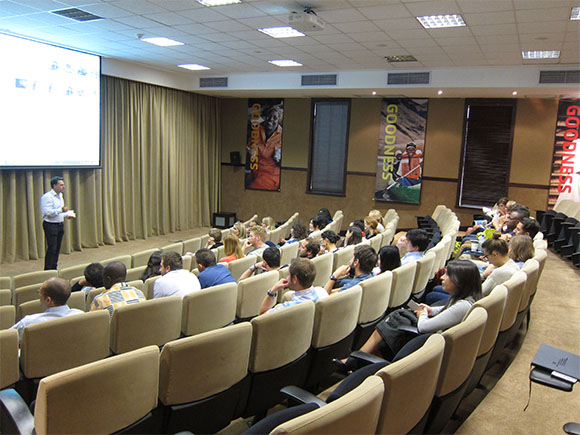 Ackerman deemed social responsibility “the right thing to do,” his son, Jonathan Ackerman recalled Wednesday during a presentation to Global Network for Advanced Management students held at the grocery chain’s headquarters in Cape Town.

“My father was a real fighter against apartheid,” said Ackerman, the company’s customer relations director.

The company has always given 7% of its profits to charitable causes. When employees have needed funding for a local bake sale, or to help build schools in a rural community, the company has always found a way to provide support, he said. Giving back has proven to be good business. The company has expanded to more than 1,500 locations across South Africa and nearly 60,000 employees.

Currently, a massive wildfire is burning near Cape Town, impacting many homes and forcing the city’s Cape Town Cycle Tour—sponsored by Pick N Pay—to reroute its course. The company has been quietly delivering groceries to firefighters and aid workers fighting the blaze on the frontlines, Ackerman said.

The company faced a crisis of its own several years ago, when sardines were been poisoned with cyanide in an attempt to extort the company. Within 48 hours, the company had received 10,000 calls supporting Pick N Pay because the company had acted responsibly in so many initiatives, Ackerman said. “People were saying, ‘Thank you for helping with this cause’ or ‘I support you. You helped my mother when she couldn’t pay.’ Those small things went a long way for the business… Business cannot just pursue profits. If you take care of your community, they will take care of you.”

The addition of SKOLKOVO brings the Global Network to a total of 31 schools across the globe. Seven other schools renewed their membership for three years.

The Global Network Investment Competition, currently underway for the fifth year in a row.