UCT-GSB Director Walter Baets says that companies expanding into Africa will be more successful if they collaborate with residents.

Businesses launching ventures in Africa would be be wise to be mindful of the continent’s colonial history, says Walter Baets, director of the University of Cape Town’s Graduate School of Business. While many major companies have attempted to expand into South Africa and the rest of the continent, only those that have paid close attention to the longstanding attitudes of residents toward perceived exploitation have been successful,. 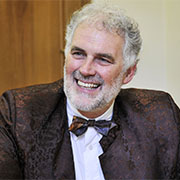 The continent still grapples with concerns about European colonialism, Baets says, especially when European companies look to set up new offices here. A French energy company, Total, tried expanding in West Africa, but its approach led to hostilities among local people, he says. The company built oil drills and other plants, but fenced the area in, hired military security, and did not return enough profits to the local community.

That led to riots and angry residents, who viewed the company as stealing its resources without giving anything back, Baets said.

“Successful companies integrate into society,” Baets said. “People on the continent want to collaborate… If you come here to do something, do it with us and not for us. It’s very colonial. Companies have to understand that. There are huge opportunities here with fantastic potential.”