Notes from day two of Global Network Week at the School of Business, Renmin University of China, titled “Managing Relationships in China: a State-Owned Enterprise Perspective.”

Today was another busy day as part of the 2014 Global Network Week at Renmin University of China's School of Business. 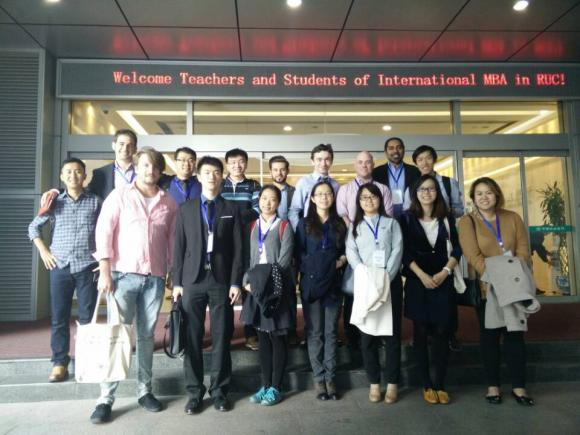 After interesting lectures on Banking in China by Professor Steven Shuye Wang PhD, School of Business, Renmin University of China and Ms. Siwei Wang, Manager of Credit Approval Department, Head Office of Bank of China, we travelled by bus to the headquarters of China Minsheng Bank.

After being warmly greeted by the staff at China Minsheng Bank we were given a thorough introduction to the history of the bank, which was impressively founded less than 20 years ago in 1996.

We were then taken to the main floor of the bank and shown the workings of the front-line. I was impressed by the depth of services provided, not least of which included hot tea, an automatic shoe-buffer and a spectacle cleaning machine!

I was most impressed however with the Q & A session hosted by China Minsheng Bank executives, many of them were Renmin University of China alumni.

One quote that stood out for me during the day came from Deputy Director of the Executive Office Ms. Wu Jiang. When commenting on the impressive number of Renmin University of China graduates in senior roles at China Minsheng Bank, Ms. Wu described Renmin University as the " Cradle of Financial talent in China."

And so ends another exciting and busy day as part of Global Network Week at RBS. I'm looking forward to tomorrow's session, where we will learn about China Steel and Industry, followed by a trip to China Steel.

About The School of Business, Renmin University of China (RBS)

Founded in 1950 Renmin University of China’s business programs were the first to be established in the People’s Republic of China. The School of Business is both EQUIS and AACSB accredited and in 2013 was ranked first in the study of Business Administration by China’s Ministry of Education. RBS first commenced its MBA program in 1990 and later launched its International MBA program (in English) in 2009. Since 1990 over 6,000 students have successfully graduated from Renmin’s MBA programs.

By Shaun Harkness, IMBA Class of 2016